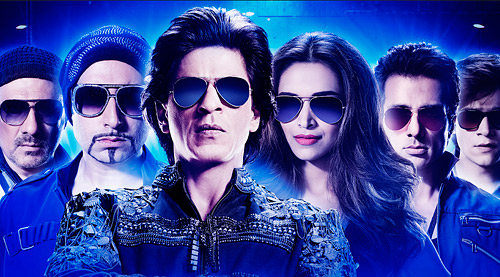 Seventy year old Susan B Rogers travelled 250 miles from New York to Washington DC on September 21, 2014 to get swayed by the magic of Shah Rukh Khan at SLAM concert. She was joined there by Maria Baez from Maryland. They both don't understand a word of Hindi but yet they're the biggest Bollywood fans. There are many more like them all across the world, who, despite not understanding the language are Bollywood addicts.

Whenever I walked the busy roads of New York, New Jersey, Philadelphia or the quieter Long Island, I came across people of Asian origin and almost all of them are fascinated with Indian films. The Pakistani cab driver refused to take money from us once he came to know that we are a group of journalists who cover Bollywood films. The Bangladeshi news paper vendor on a busy Manhattan road broke into Hindi that he had acquired studiously watching Hindi films over the years. My teenage niece Tanya (who is born and brought up in USA) is the president of an acapella music group at Stony Brooke University in Long Island and she loves to belt out Hindi film songs. Many Indians settled abroad introduce Bollywood films and songs to their children so that they remain well versed with the language of their forefathers.

As I entered my friend Gopi's house in Cherry Hill, New Jersey, a distinct smell of 'Kari Patta' hit me. His mother Mrs Ramila, a very pleasant lady loves to feed choicest Gujarati delicacies. Gopi informed me that New Jersey is one of the biggest Indian hubs anywhere in the world with an estimated 1 million strong group. Indian film artistes regularly visit for performances. The SLAM concert here on September 20 was a huge success. Several celebrities including Preity Zinta, Kumar Sanu and Mallika Sherawat will be performing in New Jersey during the Navratri season. Edison in New Jersey boasts of over 250 Indian restaurants and somehow Bollywood as a theme is a big reason in helping them spread their business and in staying connected with their target customer base.

The overseas market for Indian films has been growing rapidly. A substantial chunk of the profit share is coming out of the craze for Bollywood amongst people from the Indian subcontinent settled abroad and now amongst many people of other nationalities are increasingly patronizing Bollywood stars and their films in a big way. A South American country like Peru has seen a big demand for the release of Bollywood films. Social media is playing a prominent role in helping fans express their craze to the concerned producers. First Jab Tak Hai Jaan, then Dhoom 3 and now Happy New Year have found their way to cinema halls in Peru. The passionate persistence of Aamir Khan fans ensured that Dhoom 3 got a release in Turkey. Now they are frantic for a release of P.K. in their country. The craze for Bollywood films in Germany is nothing short of Unbelievable as almost all the fans are non Asians who don't even understand English that well.

Fans organize flash mobs on the streets of Lima on Mahi Ve from Kal Ho Na Ho, celebrate birthdays of their favourite stars like Shah Rukh Khan, Hrithik Roshan, Aamir Khan, Salman Khan, Shahid Kapoor, Katrina Kaif, Priyanka Chopra, Deepika Padukone, Ranbir Kapoor etc and put out videos with their wishes on social media platforms. Almost all the big stars are having strong fan base that is kept together by dedicated fan clubs. Many of these fan clubs are managed by fans settled abroad. @kareenak_fc a dedicated fan club of Kareena Kapoor with over 2 lac followers on Twitter is managed by a girl in USA. @shahid_online a solid fan club of Shahid Kapoor with almost one lac followers on Twitter is managed by a group of fans based in Australia and other countries. @SRKUniverse with over 2.35 lac followers on Twitter is one of the biggest fan clubs of Shah Rukh Khan and is run by a fan based in Maldives.

I was pleasantly surprised with the sort of recognition I experienced in USA during my visits both in April (for the coverage of IIFA Awards) as well as the more recent trip in this September itself. Dina met me after the SLAM concert in Washington and couldn't believe that it was really me. I had to show her my Passport to convince her. Vijay Rao wanted me to have lunch at his restaurant in New Jersey or New York. Suresh from Atlantic City wanted to meet up as he liked my work. Mehul Shah from New Jersey enjoyed my interviews and stated that he had been dutifully following Bollywood Hungama (earlier called Indiafm.com) since 1998. Gopi played my interview with Ajay Devgn, Kareena Kapoor in his car and emotionally said that he had never imagined that he'd watch any of my interviews with me sitting beside him. Staff at Dunkin Donuts identified me as the guy who says Keep on Watching on Talking Films show. It was heartening to get selfies clicked with people who knew your work maybe more than what you yourself did.

I attribute all this recognition to the immense reach of Bollywood Hungama in over 130 countries and the trust it has created amongst fans all across the world. People I interacted with didn't know any other entertainment portal, nor do they rely on entertainment channels. For them, it's a ritual to log onto bollywoodhungama.com every day. Most importantly it's the triumph of Hindi films, for it has made such an indelible impact on fans from all across the world. Rinku has been living in USA for twenty years and holds a green card but she addresses USA as, "in this country." Her heart beats for Dahod in Gujarat, India where her family still lives. She claps when her daughter Niri sings 'Give Me My Sunshine' from 3 Idiots or when son Nir dances to 'Dhol Baaje' from Ram Leela. I realized she may be happily settled abroad but her heart always beats for India. She echoes the sentiments of millions like her and its very good news for Bollywood. The overseas market (I'd call it a passionate-audience than a market) will grow by leaps and bounds in the days to come. It'll be a fascinating journey for wherever-or-whoever they might be, but Dil to hai Hindustaani. A heart, that passionately beats for Bollywood!