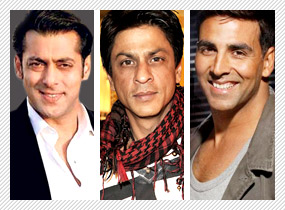 What's common between Salman Khan, Shah Rukh Khan and Akshay Kumar? Well, other than the fact that they are superstars in their own right, they are also keeping the suspense element alive, as far as the leading lady opposite them is concerned. Even as their upcoming films have created mighty curiosity at the very announcement stage, the makers are holding cards close to their chest before revealing names of the females opposite the trio.

"Salman has Sher Khan as well as Kick coming up and though both films are super-hot in the industry, there is no sight yet for the leading lady. Sohail Khan as well as Sajid Nadiadwala, the respective producers, are sure that the girl has to be a stunner. Perhaps an official confirmation may come only after 'bhai' is through with Big Boss", says a source.

One wonders though whether name of Shah Rukh Khan's heroine in Happy New Year would be made closer to the release of his Jab Tak Hai Jaan. Though all sorts of names are floating around, the film's director Farah Khan has gone totally quite on the matter, hence only adding on to the suspense.

"There is bigger suspense though around Akshay Kumar's leading lady in his next, Naam Hai Boss", quips an insider, "The biggest challenge is to know whether there would be a heroine at all in this film which would be directed by Anthony D'Souza. Though earlier it was said that Akshay would go solo, latest development is that he may get a heroine after all."

With the film all set to go on floors next month and Salman as well Shah Rukh kick-starting their films by December, guess there are three girls out there already waiting to get lucky.

Who would be your choice?