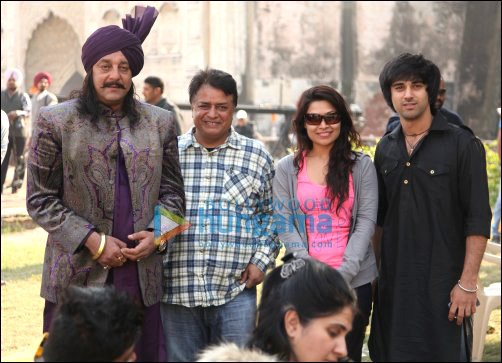 Sanjay Dutt may have kissed politics goodbye. But he continues to share cordial vibes with politicians. Last week when some friends of the affable Dutt from the film industry needed help to get permission to shoot in Chandigarh on property owned by Haryana's MLA Ajay Chautala, Dutt stepped in gallantly and won at least two new fans for a lifetime.


Being friendly to Sanjay Dutt can be remarkably beneficial. So newcomers Pulkit Samrat and Amita Pathak discovered when they were denied permission to shoot on property owned by Ajay Chautala.


Says a source, "The sprawling property in Chandigarh owned by Ajay Chautala was needed for a crucial one-week schedule of Bittoo Boss. When the crew suddenly got to know that they would not be allowed to shoot at their planned venue, they were in a panic situation. At his wit's end producer Kumar Mangat called up his business partner Ajay Devgn's buddy Sanjay Dutt." Within hours the required permission was granted.


Says Mangat, "It was a touch-and-go situation for us. We had to shoot in Mr. Ajay Chautala's property. And we were suddenly restricted from doing so. If we had failed to shoot in Chandigarh, our schedule would have been ruined. I asked Mr. Dutt since he's very close to Ajay and me. Within no time we were allowed to shoot as per our requirements."


Adds Mangat, "Sanju Baba is always there for all his friends. To me and Ajay he's family."


To express their gratitude, the film's lead pair flew from Chandigarh to Patiala where Dutt was shooting with Devgn for Son Of Sardar, to personally thank their new godfather.


Incredibly indebted, the film's debutant hero Pulkit Samrat says, "It's the least we could do. First I got Salman Bhai's love and support. Now I've Sanju Sir's blessings. I guess I am lucky."