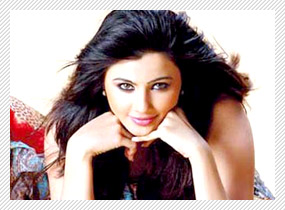 Daisy Shah has surely enjoyed every moment of the pre-release blitzkrieg centered on Jai Ho. Though one may have expected that the Salman Khan starrer would be revolving only around Salman Khan, there has been ample stage and opportunity provided to Daisy for making her presence felt well. A self confessed introvert, she takes a couple of minutes to open up. However once she does, there is no stopping her.

“What’s the point if you can’t hug and kiss Salman?” – Daisy Shah

Here is presenting Salman's newest heroine at her 'bindaas' and unabashed best.

Wasn't there any apprehension though that since Jai Ho is an out and out Salman Khan movie, you may be relegated to the background?

Well, why just Jai Ho? You pick any of the last so many Salman Khan movies and they have been centered on him. Now even if just your name is getting associated with Salman then it is a big thing in its own way. Moreover, when you watch the film then uske baad aisa nahi lagega ki meri zaroorat nahi thi. It is not the kind of movie that heroine chahiye toh kisi ko bhi le lo.

So what kind of movie is Jai Ho and how do you fit in?

Arrey, even if Salman in an action film, audience want to see him in the lover boy mode as well. So here in Jai Ho he is shown as someone trying to bring on a movement. Still, agar uss bande ka dil achcha hai toh usse ek bandi bhi toh chahiye. Uska bhi to dil hai, uski feelings hai, usse pyaar toh hoga naa? Ab woh kisi ladke ke saath toh pyaar nahi karega naa? You need a girl for that. I fit in there.

But then there are three women in the film.

I knew about that from the very beginning. But then three women in there doesn't result in a crowd. There is one love interest, one negative lead (Sana Khan) and one sister (Tabu). Each of these characters is different. Negative character se toh love interest ko koyi problem hogi nahi. Aur naa hi usse sister se koyi problem hogi. They all are in the movie for their own interest. Naa unka role main le sakti hoon, naa mera woh!

Other than the three women, there are also more than a dozen odd notable character artists in there. Isn't that too much of a crowd already?

Jai Ho is the kind of film where even if one character is taken out, the narrative won't flow. The entire movie is based on human chain where all characters are linked to each other. Even if one character moves out, the link would be broken. Moreover, all said and done, it is not an out and out action movie either. There are other elements as well that add on to the entertainment quotient, including romance. I am playing a very sweet character and there is no way that people won't fall in love with her.


22
There was no love lost though, when it came to Salman's perception around you. After all, you had almost lost out on working with him. Do you look back and feel that you could have perhaps picked up Bodyguard as well?

Meri life ka funda simple hai that kuch bhi ho jaaye lekin kaam ko lekar relationship kharaab naho hona chahiye. Bodyguard ki alag hi kahaani hai. Ek toh I was anyways doing a South film at the same time so I couldn't have jeopardized that commitment. Doosri baat, agar ek ladki ke hisaab se dekhoon, so tell me one thing. If someone comes and tell you that you are the chosen one for a Salman ki movie but neither would you have much to do with him in there nor would get a chance to hug and kiss him, then how would you react? In such a case, what's the point in doing that film?

Now that Jai Ho has hit the screens, you must be indeed seeing the point of working with Salman, isn't it?

Oh yes, indeed. It is a big launch for any girl. It is a big film and Sohail bhai too is directing after a pretty long time. The message that we wanted to bring in front of the audience has been justified well in the storytelling as well. Those who have seen the film already in the special screenings have been appreciating me. Now I am waiting for the real audience to give me a

Well, the real you is not introvert for sure though. Why that perception being created for the media?

See, when it comes to media, I am still in a thinking mode around what am I supposed to say. For me, sometimes it is difficult to break the ice and say something. It depends upon what the conversation is and who I am talking to; then I open up accordingly. Otherwise I like observing things than saying something. I am getting a hang of it now; samajh aa raha hai ki industry mein kaise, kisske, kahan aur kya baat karni hai (smiles).