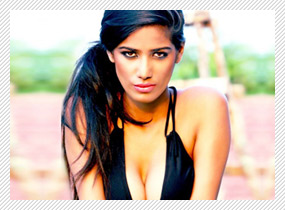 Chronic shocker Poonam Pandey is now in shock. A political party has been pulling down the posters of her debut film Nasha. Poonam is a little hurt. "This has hurt me. I don't normally allow myself to get affected. But I never expected I'd be targeted this way for my first film. It has made me nervous. I knew I wouldn't be welcomed with open arms into cinema. I've no godfather, no support from the industry. But I didn't expect to be welcomed in this way. What have I done that is so scandalous?"

Tongue-in-cheek, Poonam lashes out at the hypocrisy of showbiz. "I don't think I've ever crossed limits. I've always said more than I've done. I've seen so many posters and hoardings that are far more suggestive than mine. My posters have nothing scandalous in them. I haven't shown my private parts."

Poonam feels targeted. "Why me? I just feel some elements are trying to cash in on my popularity.

The doughty devil-may-care Mumbai girl maintains the image and the individual are the same. "What you see and read of me on the internet is what I am. It isn't as if me and my team sat down and scripted an entirely different Poonam Pandey for the public. Main aisi hi hoon. It isn't as if I become a different person at home. To my parent's dismay, I am the same at home and in public."

She laughs heartily. "My parents don't like the way I conduct myself. Though I've been born and brought up in Mumbai, we're from a conservative Brahmin family. My behaviour is quite shocking to my family. Lekin main kya karoon? This is the way I am."

Poonam's journey into being an internet icon began when during the 2011 World Cup she spunkily vowed to streak if India won. Recalling her initiation into super-notoriety Poonam laughs, "That was quite something. I never expected to get so much attention for it. That incident brought me into the limelight. But it went out of hand. I had 20-25 criminal cases against me. It took me a huge amount of effort to extricate myself from all the trouble. But you know what? It was worth it. That one incident got me more attention than I ever imagined."

The image of the bold brassy rebel does get out of hand sometimes. "There are some people who like to attack me constantly. But it's okay. It's their way of getting attention. Most people on the internet love me and my pictures. Life is more or less fine. There are some spoilsports."

Poonam candidly admits she loves all publicity, good or bad. "Log mere bare mein achcha bole yah bura bole lekin bole toh sahi. For me all publicity is good publicity. Unfortunately my parents don't agree. They don't approve of the things I say and do. They are embarrassed by my image. Every day when I go home after work I wonder if they've seen or read something more about me that has upset them. It's a constant conflict. But they've now come to terms with what I am."

Poonam says her family has given up on her. "They know yeh ladki sudhregi nahin. You know what? I enjoy all the controversies. I love being in the news. I take everything positively."