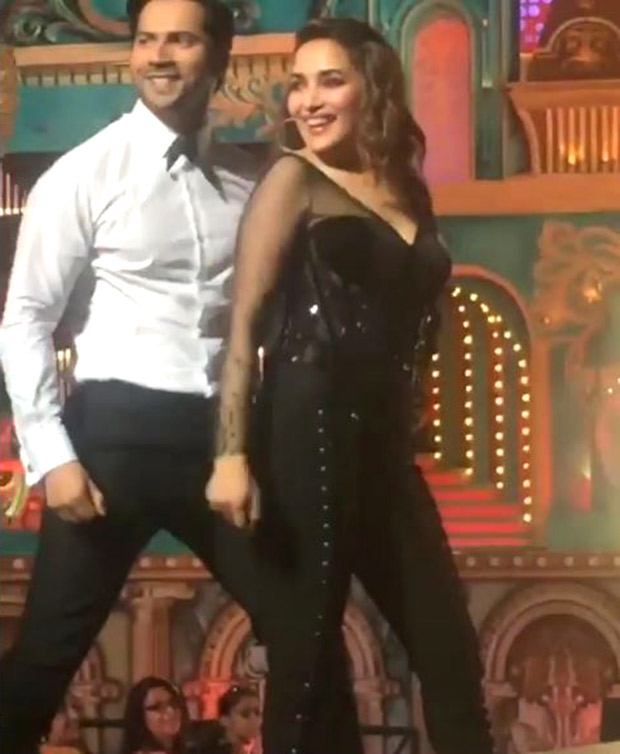 Earlier we had reported that Varun Dhawan and Madhuri Dixit were all set to perform together on the song ‘Tamma Tamma’ on stage. And this time around, fans can gear up to see the stars setting the stage on fire at the recently held Star Screen Awards.

The Star Screen Awards gala that celebrated some of the iconic performances of the year was held in Mumbai last night. Although many from the industry decided to give this glitzy evening amiss, a few popular Bollywood personas managed to groove and make the evening a jazzy affair to remember. Amidst a bevy of performances that night, one was a dance performance of Madhuri Dixit who shook a leg with none other than the Gen Y superstar Varun Dhawan.

As we all know, Varun Dhawan, earlier in the year, had danced to the evergreen dance number ‘Tamma Tamma’ in his film Badrinath Ki Dulhania along with Alia Bhatt. The song was originally picturized on Madhuri Dixit and Sanjay Dutt [Thanedaar]. Hence, it was truly an epic moment to have the original actress and the new version star to come together on stage and put up such a wonderful act. Here’s a glimpse of their stunning performance that has already gone viral on social media.

While it is always a pleasure to watch Madhuri Dixit dance, Varun Dhawan has time and again proved his flair for dancing in his films and this time around it was no different on stage. The two repeated a few moves even from the original peppy number.

Talking about the function, it was also special for Varun Dhawan who walked away with one of the trophies that evening as the winner of Best Actor in a Comic Role. The actor was awarded for his role in Badrinath Ki Dulhania.

“Sriti Jha is my favourite actress, she has…

Arti Singh reveals why she did not stay in…

Amar Upadhyay reacts on being considered as…