Salman Khan is KILLING it at the box office as his last release Tiger Zinda Hai has crossed the coveted Rs 300 crore mark at the India box office.  Thanks to Tiger Zinda Hai and Padmavaat, the industry started off the year 2018 with a bang! But Salman is not going to stop at this as he has Race 3, Bharat, Welcome To New York already in the pipeline. The TZH star recently has been focusing on completing the shoot of Remo D’souza’s Race 3 to make sure that the film goes for post-production and gets ready in time before Eid. Remo took to social media to announce that the unit has completed the first schedule of the film and are all fired up to move on to the next lap in Abu Dhabi and Thailand. 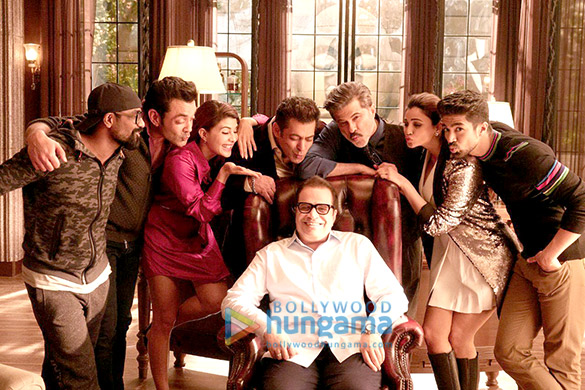 The star, along with his other co-actors Bobby Deol, Saqib Saleem, Anil Kapoor, Daisy Shah and Pooja Hegde, has been shooting in the city. The film was in the news recently after a few goons were mobilised by the dreaded Jodhpur gangster Lawrence Bishnoi who threatened to kill Khan. Luckily, police got a whiff of this and the miscreants were nabbed and Bollywood’s bad boy Salman was escorted safely back to his apartment in Galaxy, Bandra. Despite all these issues its commendable that makers: Director Remo D’souza and producer Ramesh Taurani finished the first schedule on time.

The movie will also mark Bobby Deol’s return to the mainstream cinema space after a long, long time. Though he was recently seen with his dad Dharmendra and brother Sunny Deol in Shreyas Talpade’s Poster Boyz, the movie did not do too well. With Salman Khan’s big ticket vehicle, he finally has a chance to redeem himself at the box office!