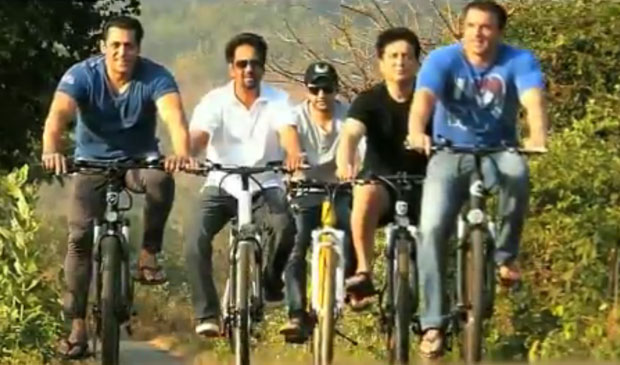 Superstar Salman Khan and his brother Sohail Khan will be soon seen in the much awaited film Tubelight. The promos and the buzz about this film have hit the sky, ever since its release. Besides that, the film’s songs have already become a rage the same way Salman Khan’s bonding with Sohail Khan in the film.

Speaking about Salman Khan’s bonding with Sohail Khan, Bollywood Hungama came across this cute ad commercial for the recently launched ‘Being Human’ range of bicycles, which has the Khan brothers cycling their way alongwith a bunch of their friends. Needless to say that, the ad is extremely heartfelt and appealing, and definitely does live upto the brand name of ‘Being Human’. Sajid Nadiadwala and Salman Khan share a great friendship and can be seen in the video shared by Salman. Sajid's spokesperson shares, Sajid and Salman go way back, the duo has known each other for more than 20 years now. They share a very thick friendship. Sajid's first directorial was with Salman Khan for Kick. Besides friendship, they also consider each other as family”. Sajid Nadiadwala dressed in his apt cycling attire and others in their respective gym wear, the sight of them cycling definitely motivates one to pick their own cycle and head off for a nice spin!

Besides Salman Khan and Sohail Khan, Tubelight also stars the famous Chinese actress Zhu Zhu, who makes her Bollywood debut with this film.  Directed by Kabir Khan, the film is slated to release on June 23 this year.