Karan Johar is back with the sixth season of his celebrity chat show, Koffee With Karan. The season was opened by the leading ladies of Bollywood Deepika Padukone and Alia Bhatt. While the season opener was pretty amazing, the second episode featuring Ranveer Singh and Akshay Kumar boasts of being a laugh riot with these two stars on the coffee couch. 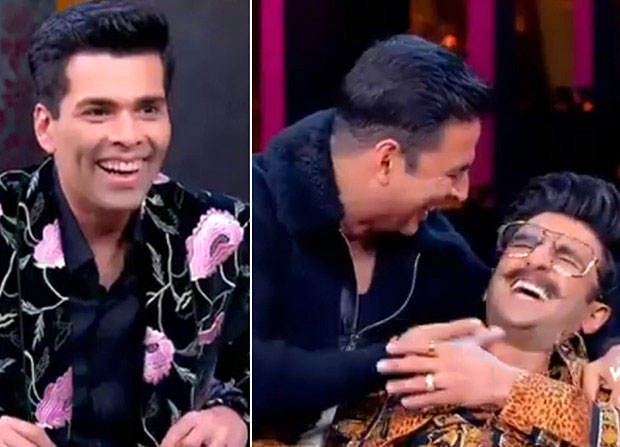 The two promos that have been released by Star World shows how crazy these two celebrities are. Akshay Kumar is seen making fun of the powerhouse energy of Ranveer Singh at celebrity weddings. He mocks and makes fun of how Ranveer doesn't want to leave the weddings and continues dancing whilst the bride and groom wait for him to leave. Akshay even says that Deepika Padukone should be credited for keeping up with Ranveer's insane energy level all the time. They even try to make Ranveer confess about his wedding plans with Deepika. From the looks of it, the promos surely have made everyone excited for the upcoming episode.

In case you missed it, Deepika Padukone confessed on Koffee With Karan 6 that she has been dating Ranveer Singh for six years now. Also, on Sunday, the two of them announced their wedding date which will take place on November 14th and 15th.

The second episode of Koffee With Karan starring Ranveer Singh and Akshay Kumar will air next Sunday, October 28.

After @deepikapadukone and @aliaabhatt in the premiere episode of #KoffeeWithKaran, it is time for Khiladi @akshaykumar and Khilji @ranveersingh to take over the #KWK with their crazy antics next week! ???? - @starworldindia | @realbollywoodhungama

Sneak peek: What happens when two of the best performers in Bollywood take the couch on #KoffeeWithKaran? #KoffeeWithAkshay #KoffeeWithRanveer @akshaykumar @ranveersingh