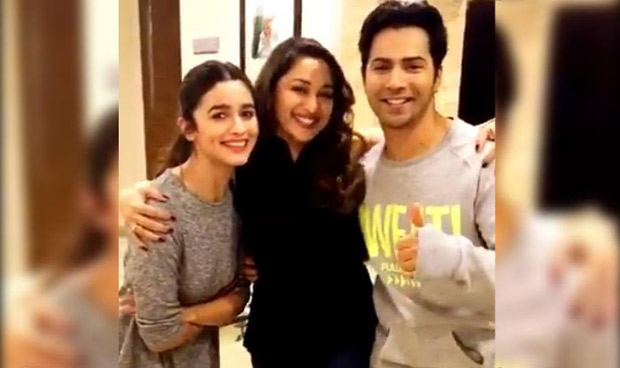 Just a day ago, we had mentioned about the way Varun Dhawan and Alia Bhatt wanted to show their song, a remake of the 90s chartbuster ‘Tamma Tamma’ to the actors who originally featured in it, Madhuri Dixit and Sanjay Dutt. While we already heard that Madhuri was not only touched by the gesture but was also happy with the way it turned out to be, here’s a glimpse of her promoting the new version of the track.

Alia Bhatt recently took to Twitter to share a video with co-star of Badrinath Ki Dulhania, Varun Dhawan as well as Madhuri Dixit when the duo went to meet the actress to get her seal of approval. Madhuri Dixit gladly participated in this video as she urged the audience to wait eagerly for the song which releases in the next couple of days. Sharing it on the micro blogging site, Alia said, “Hear it first from the dancing queen herself @MadhuriDixit!!!!! 2 days to go for #TammaTammaAgain @Varun_dvn!!!!”

On the other hand, as far as showing it to Sanjay Dutt is concerned, last we heard that Varun and Alia were planning on visiting him after they wrapped their schedule last evening in order to seek his blessings too. Badrinath Ki Dulhania will bring back memories of some popular blockbusters and one amongst them is the peppy, dancing number ‘Tamma Tamma’ from the film Thanedaar.

The second film in the Dulhania franchise, Badrinath Ki Dulhania also stars Mohit Marwah, Gauahar Khan, Shweta Prasad Basu among others and is directed by Shashank Khaitan. The film is slated to release on March 10.