Katrina Kaif is definitely a stunner when it comes to her perfect physique. Though it seems like easy to have a good body, Katrina Kaif undergoes rigorous workout regime to stay fit and healthy. The actress, known for being a fitness enthusiast, never fails to hit the gym even during her busy schedules.

Just a day ago, Katrina Kaif shared a photograph of herself from the gym. She was caught in the moment while lifting the weights. She captioned the photo, "It's not about right or wrong, it's about doing or not, it's about confidence and fear, and most of all it's about is it quiet or noisy in your head - (garyvee)." 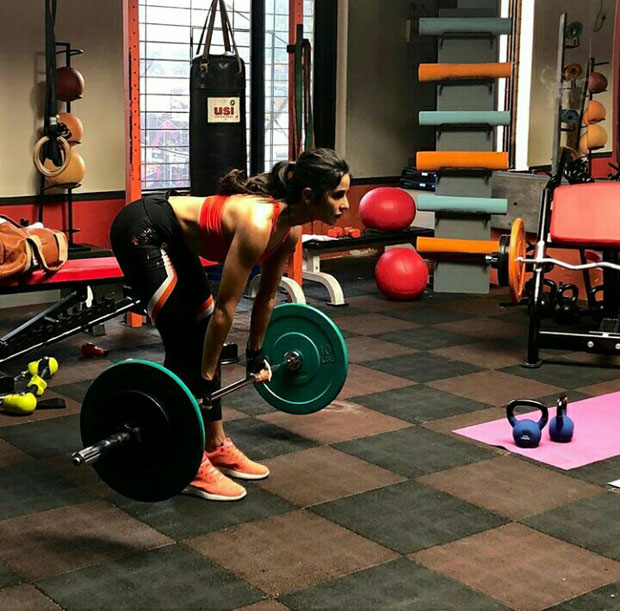 Katrina, who trains under celebrity fitness trainer Yasmin Karachiwala, shared a video with her while doing the resistance band training. She was accompanied by makeup artist Daniel Bauer. She captioned the video, "@yasminkarachiwala innovating ways of using a resistance band @danielbauermakeupandhair doing one of the three things he usually does on set ... dancing working out or makeup."

Meanwhile, on the work front, Katrina Kaif has been quite busy working on several projects. She was seen in blockbuster Tiger Zinda Hai with Salman Khan which released during Christmas 2017 week. She is currently filming two films simultaneously. She is starring in Aanand L Rai's Zero alongside Shah Rukh Khan and Anushka Sharma. Katrina Kaif is also starring in Thugs of Hindostan with Aamir Khan, Fatima Sana Shaikh and Amitabh Bachchan. Both the films are scheduled to release later this year.

@yasminkarachiwala innovating ways of using a resistance band @danielbauermakeupandhair doing one of the three things he usually does on set ... dancing ???? working out ???? or makeup ????