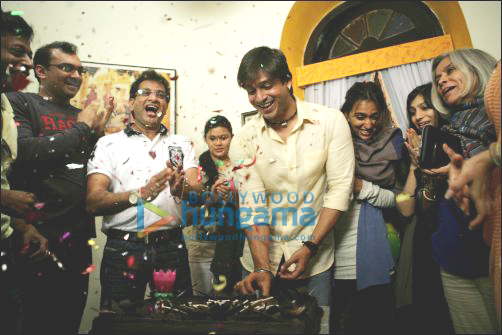 Vivek Oberoi's purple patch seems to be going on, as the actor is part of two highly anticipated films like Zilla Ghaziabad and Krissh 2 and is also being signed on as an ambassador for various brands. Vivek has been so busy that he has not even been home for a month now and it seemed that he wouldn't be able to do so even on his birthday on September 3.

However, this being his first birthday after his, his wife, Priyanka Alva, decided to surprise her hubby by going down to Wai, where Vivek was shooting for his upcoming film, along with Vivek's parents. A source from the sets informs us that Priyanka called up the production guys and with their help planned a surprise bash to bring in Vivek's birthday by the poolside of the hotel where the unit is staying.

When the clock struck mid-night a unit member brought Vivek to the venue saying that the unit wanted to cut a cake for his birthday, however on seeing his parents and wife present there, Vivek got ecstatic and couldn't concede his happiness and was overheard telling others that this was his most special birthday ever.