Uunchai, Sooraj Barjatya's eagerly anticipated new drama, has already captivated audiences. And why wouldn't they? After all, it stars some of India's most adored senior actors, such as Amitabh Bachchan, Anupam Kher, Sarika, Neena Gupta, and Boman Irani. According to recent reports, while filming in the national capital, Amitabh Bachchan reconnected with his Major Saab co-star Nafisa Ali. On-site, both seasoned performers were seen exchanging embraces and smiles. When Nafisa Ali shared a photo of their special reunion, she transported her fans back in time. 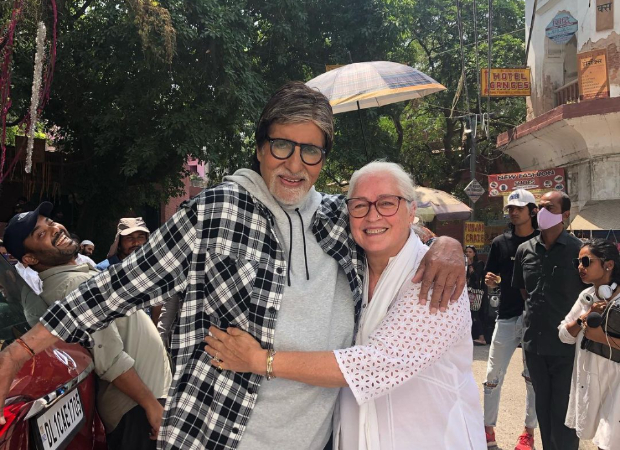 The two actors, who played a married couple in the 1998 film, are all smiles in the series of photos. In the photos, both actors are dressed comfortably, with Nafisa Ali wearing a salwar suit and Amitabh Bachchan wearing a grey sweatshirt overlaid with a check shirt. "My very attractive, fantastic man, lovely energy, and cute co-star Amitabh Bachchan of the film Uunchai, directed by Sooraj Barjatya, is now shooting in Delhi," the veteran actress captioned the photo set.

The photographs were quickly identified by netizens. "Reunited after Major Sahab's visit to Pune," one fan said. I worked at the Bule Diamond during your two-month stay." Another admirer gushed about the film, writing, "Adorable picture!!" "I'm looking forward." "Talk about gracefully ageing," another fan remarked. "I hope to be able to look like that in the future."

Anupam Kher previously posted a star-studded group selfie of the film's experienced cast on his Instagram account. The image was captured from a moving vehicle. He captioned a photo of himself with Amitabh Bachchan, Sarika, Neena Gupta, and Boman Irani, "May your day feel as amazing as taking a great selfie of the ideal happy moments!" "Greetings, Chief!"

In addition to the veteran cast members, Parineeti Chopra plays an important role in Uunchai. Sooraj Barjatya has written and will be directing the film Uunchai, which is about friendship. Danny Denzongpa has a significant role to play.

EXCLUSIVE: Kartik Aaryan reveals what he…