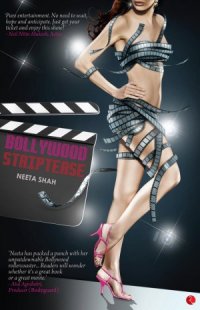 Remember the days of sitting in a cafe, snatching a few hours to pen your thoughts, ordering your fifth cup of black coffee and typing away on your laptop before you know its dinner time? The dual perspective of both, the underdog writer in a pit of depression and striking allure of the juvenile model has many an authoress shaped. Introducing Neeta Shah - This gorgeous half Gujarati half Parsi lass chose rather to take the high road and become renowned for her brains instead of her beauty. But when you have a killer combo of beauty, brains and business (she's a Chartered Accountant too) your 'Best Seller' tag isn't far behind. Isn't that a twist in the classic tale? So just what is it about Neeta Shah that makes her debut work of fiction 'Bollywood Striptease' the talk of the town? For starters, digest this - The movie rights of the book have already been acquired (before the book made it to the shelves), by IROCK (Ragini MMS & Rock the Shaadi). I met the authoress at Costa coffee house before the grand launch of her book due to take place this evening in Bandra. She orders her gingerbread latte and a sandwich. She's a tad nervous. Actually a lot! She sips her coffee and in a fraction of a second a surreal lovefest of words flow... mixed with over the top excitement, occasional loss of words and that Stevia sugar free, and the lovefest continued. Here's an illustrious interview with the glamorous Neeta Shah. It's couch, coffee and conversation time!


"Bollywood Striptease Strips Bollywood Naked"
When I started writing the book and finished writing, I thought - What can be the apt name for the book? The idea came about from a naive coffee conversation while I was briefing my friends about the many real life incidents that my friends have gone through in the film industry. Some were really heart breaking, while some were success stories too. The book was factual but fictionalised and the only name that came to my mind was Bollywood Striptease because it 'Strips Bollywood Naked'.


"75% content in Bollywood Striptease is real"
I wanted to pen down my experiences. It's not only my own experiences but my friends too. 75% of the content is real. I can't take names or I'll get in deep trouble. Honestly, the writer in me was unlocked by my mentor and IROCK CEO, Siddharth Jain. He was the one who told me that I could write. One thing led to another and here I am waiting for my book to get launched this evening.


"The most scandalising segment in the book is RED ALERT"
There is a section in my book called 'Red Alert' that comes after few chapters. It is to caution people about certain aspects that commonly happen and take place in Bollywood. Each 'Red Alert' segment is scandalising.

Win copies and merchandise of Bollywood…