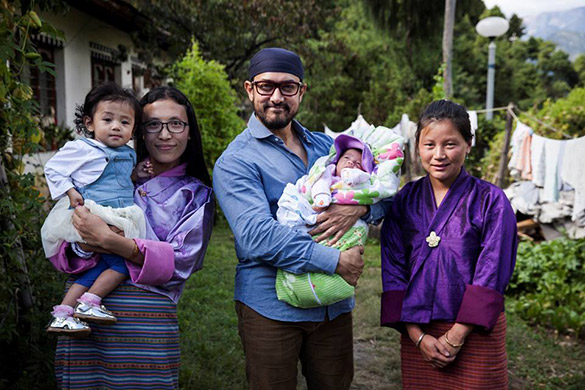 Aamir Khan has been the goodwill ambassador for UNICEF for quite some time now. We all know that Aamir has been associated with several campaigns related to clean water, helping farmers and children.

On Tuesday, Aamir Khan visited Bhutan as a UNICEF Goodwill Ambassador to support the campaign for child nutrition. He met several mothers and children who are affected by malnutrition in the country. He also learned about the new ways UNICEF is trying to address this major issue across South Asia. He met with Rudolf Schwenk, UNICEF Bhutan Country Representative, who had helped him gain more information about the campaign. Later, Aamir headed to Drukgyel Basic Health Unit, which was established in 1998 in Paro, where he got an opportunity to interact with women and children suffering from malnutrition.

In a video shared by UNICEF South Asia, Aamir Khan shared his experience from his visit. He said, "Today, I heard many remarkable stories about how young mothers have been able to deliver healthy babies despite complications and challenges. This says a lot about the importance of having an efficient health care system with trained health workers in place, which ultimately plays a crucial role in saving many children's lives. I have heard so many good things about the progress Bhutan has been making but there's always scope for improvement and we are concerned about reaching every last child.”

On the work front, Aamir Khan is gearing up for his next release Dangal which is slated to release on December 23.