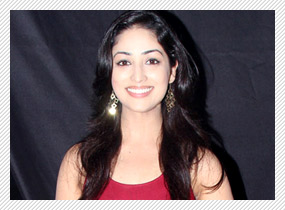 Close to two years after her Bollywood debut Vicky Donor, pretty woman Yaami Gautam is returning to the Hindi film scene with Total Siyapaa. With this yet another slice of life entertainer, Yaami would be seen in a realistic set up all over again, which has been created by producer Neeraj Pandey and director E. Niwas.

Looks like Total Siyapaa is a smile through affair, isn't it?

Absolutely. Apart from just laughter, what sets the film apart is that it is coming from sensible makers such as E. Niwas and Neeraj Pandey. You are assured that it is going to be something which is very meaningful and you take something away with yourself as you leave theatre. There is nothing preachy about the film though and it is a very funny in a non-caricaturist way. The very concept of a Pakistani boy being introduced to a Hindu Punjabi family as a prospective groom brings in endless possibilities. Due to this, madness happens and what follows next is presented in a very tasteful way.

There are chances of the whole concept turning a little sensitive though. How has that been taken care of?

There isn't anything offensive in there and all that Total Siyapaa does is entertain you. The biggest factor going in its favor is that it is a very light hearted film, just as was the case with Vicky Donor. The entire setup and characters are quite lively here. I am very happy that I debuted with someone like Shoojit (Sircar) sir and now for my second film I am working with Neeraj Pandey. These are not frivolous filmmakers.

How has the transition been from Vicky Donor to Total Siyapaa?

See, I am not a trained actor who went to a training school or always wanted to be an actor. Whatever I have learnt is on the sets. For me, my learning ground has been with the people that I have worked with, especially my directors. Of course, I found the concept of Total Siyapaa very catchy and interesting. Moreover, with the kind of people who were backing it, I saw just no reason for saying 'No' to it. It is very interesting in the way it has been written. The script is absolutely flawless and the way E. Niwas has interpreted it, I am very happy with the resulted.

Had you seen the original Only Human though?

Yes, of course. I think it is important to see the movie when it's an adaptation as it gives you a very clear insight as to what it is all about. It isn't as if I will see the movie then I will act like the actress in there. After all, everyone bring his or her own individuality into play. Still, watching a film only helps you to understand the script better. In fact I watched Only Human with my mother without telling her that I had been approached for it. She really enjoyed the movie and then I told her that I had been offered a part in the Hindi adaptation. As a matter of fact my mom and dad had also loved Vicky Donor at the script level.

There are too many characters in Total Siyapaa. Was it tough to make your presence felt?
No, because the character is very well defined. Also, from the promo you can figure out that all the characters are very important. What matters is that when people watch your film, they should enjoy what every character brings on the table. As for me, I approached the role by first understanding what the director wanted from me. I had to adapt to the requirements of my character. Every film teaches you something different and you have to be flexible enough to adapt to it.

All eyes are now on whether you would be delivering well in your second outing too.
Higher expectations are always good as they work for your betterment. I do not want to sound immodest but when both critics and audience appreciate your work, there can be nothing more humble. To gain appreciation as an actor and hear people say that you can really act is a very rare combo. I absolutely cherish and relish it, more so as I didn't have a very conventional debut. I hope the trend continues.