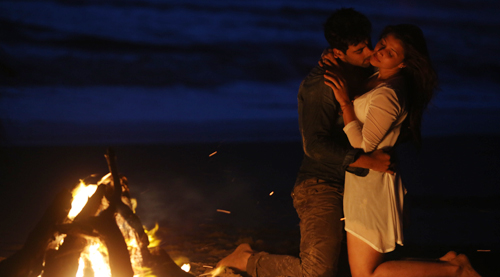 Being a Chopra girl and debuting in Bollywood is the newest trend. If Priyanka Chopra started it all and cousin Parineeti followed many years down the line, last year also saw the debut of Meera. However, what has caught everyone by surprise is a holds-no-bar show by Mannara (Barbie) Chopra that has hardly left anything to imagination in her debut Hindi film Zid.


For starters, in a single stroke Mannara has made her stand clear that she is uninhibited and unabashed when it comes to demonstrating sexuality on screen.


"Amongst all Chopra girls, she is indeed projecting herself to be the boldest of them all," says an exhibitor, "Since the film is catering to the masses, she hasn't shied away from delivering what is expected out of her. It is good that she has set her priorities well. From what I have heard, she is totally professional and does what a scene demands. She doesn't throw tantrums and goes about her job."


However, a segment of the industry wonders whether it is too quick too soon for young Barbie who is just taking a baby step into Bollywood.


While one waits to see that side of Mannara, for now it is going to be a steamy show on display as she goes about executing her job in Zid.