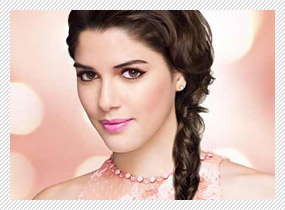 She was seen as a part of Sixteen last year. From playing a rebellious school girl in the ensemble starrer to stepping in as the only leading lady in the college affair Purani Jeans, it has been a gradual transition for Izabelle Leite. Hailing from Brazil, the girl started off as a model, only to find herself acting in films. This time around, she has Tanuj Virwani and Aditya Seal for company in the Manju Lulla production.

What made you pick Purani Jeans after Sixteen?

Cliched as it my sound but the driving factor here was the script. I guess my director Tanushri Chattrji Bassu deserves a big thank you for the script she brought to me. She wrote things in there that had happened to her in her real life too. So in a way, I am playing a real character, though not necessarily Tanushri herself! Moreover, it was a unique experience to be shooting a film which is set in the 90s. I was born in 90s and hence was a kid back then. To be living that life as a grown up was really good.

I hear the team also had a good holiday at work while shooting in Himachal for almost the entire film.

Yes, it was one of the most beautiful places that I have been. I was glad that I got to shoot in Himalayas as it was like being a part of a movie in real life. Then I was always with bunch of five boys, including Tanuj (Virwani) and Aditya (Seal). Even when I was not shooting, I used to come on the sets to see them and learn from them. We had lot of fun together.

To begin with, they always used to make me feel like one of the boys. (Smiles) In fact I used to order food for all these boys in my room so as to build some camaraderie and all that they used to talk about was girls, cars and superheroes. It was a good group to hang out with as I also had a female friend of mine accompany me from Manali. Guess what, Tanushri also gave her a small role in the film!

Considering the fact that Tanushri was around, it must have been comforting as well, isn't it?

(Laughs) I thought that since she is a woman, working with her would help so that I could be more open to her about a few things. But then there wasn't anything like that! She was so much into the filmmaking that in the end it was all the same. I too understand now that when it comes to films, it's your work that ultimately matters!

What else have you learnt in Bollywood so far?

I have been here since three and a half years and it has been good so far. Everything just fell in place because to begin with, I had come to India just for modeling, which by the way was only a three month assignment. It was so hilarious when as a model, during audition I had to say three lines in English and then run away (smiles). Initially I didn't know how to speak English at all. Then I learnt a few lines like 'I am hungry' or 'Hi, my name is Iza'. I was only 19 years old at that time and had no idea about Bollywood or the movies.

And then Sixteen happened...

Yeah! I am happy about the fact that the director (Raj Purohit) there believed in me and gave me Sixteen. The film changed my life and hence that film is so very special to me. I hope I keep doing movies and grow well. Now my plan after Purani Jeans is to be in this industry for long and deliver my best. I also want to learn Hindi and pick up dancing. In my personal life, I plan to bring my family here more often because sometimes you need your mom for support.

In personal life, you keep getting linked. First it was Virat Kohli, then it was your Purani Jeans co-star Tanuj and now there are whispers going around you dating Sidharth Malhotra.

A lot has been said and written about me and Virat already. I am most certainly not dating Sidharth (smiles). As for Tanuj, he was never my boyfriend. Yes, we spent a lot of time together during the making of Purani Jeans. That's because most of my scenes are with him. In fact he also helped me a lot during my whole journey of filmmaking. However, we were never dating. People can think and talk about whatever they want to. When I am dating someone, everyone will know. It is such a normal thing; why to make so much fuss about it.

So what next after Purani Jeans?

My immediate goal? That next time, I can give you at least half of my interview in Hindi.

There is one more Pakistani actor in Ae Dil…

Check out: Huma Qureshi and Vidyut Jamwal in…

Will Fawad Khan and Mahira Khan have…