Bollywood actress Sushmita Sen, on Sunday evening, shared a video of her grooving with her lovely daughters Alisah and Renee Sen. The former Miss Universe can be seen having an amazing time with her girls as they flaunt their dance moves. The actress is dressed in a blue sweatshirt with stars drawn on it and paired it with white pants. Her bond with her daughters and their chemistry makes the video a special thing to watch. 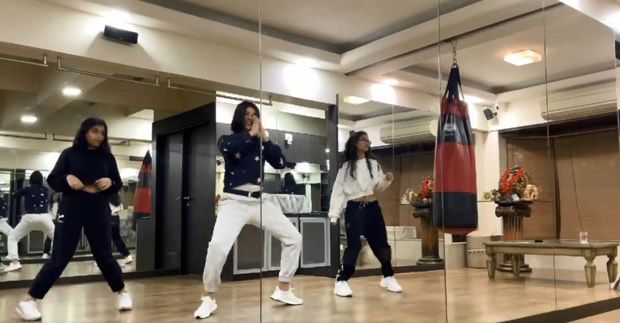 Captioning it, she wrote, “Don’t feel like working out? No problem , let’s dance!! Listen to your heart..follow the beat & move to your own rhythm!! (Cardio done)#mamaspride Alisah & @reneesen47 ❤️ Thank you for always keeping me on my toes!!!"

Sushmita was on a workout break in November. She had revealed she had undergone surgery and was recuperating from it. On the occasion of her birthday, she hosted an Instagram Live in which she also revealed she has undergone a makeover and debuted her new hairstyle.

Besides her health, Sushmita also made headlines for her break up with her boyfriend Rohman Shawl. The actor shared a picture with the model and confirmed that they’d separated but added that they’d continue to remain friends. “We began as friends, we remain friends!! The relationship was long over…the love remains!! #nomorespeculations #liveandletlive #cherishedmemories #gratitude #love #friendship," she captioned the post.

On the work front, the actress was last seen in the web series Aarya 2 for which she was much applauded. The second season of the Disney+ Hotstar drama was released in 2021. Sushmita essayed the titular role. While she made her digital debut with the series, Sushmita is yet to announce her comeback in films.

Also Read: EXCLUSIVE: Sushmita Sen on Aarya 2 and changing Indian cinema- “The characters I played did not work because it was ahead of its time”