Kapil Sharma recently tied the knot with long time fiancé Ginni Chathrath in a lavish wedding ceremony in Punjab. Now that he is gearing up for his new innings on small screen, the actor will yet again have Bollywood celebrities as guests on the show. Amongst them will also be Sunny Leone, who recently shot for one of the episodes of the new season of the show. 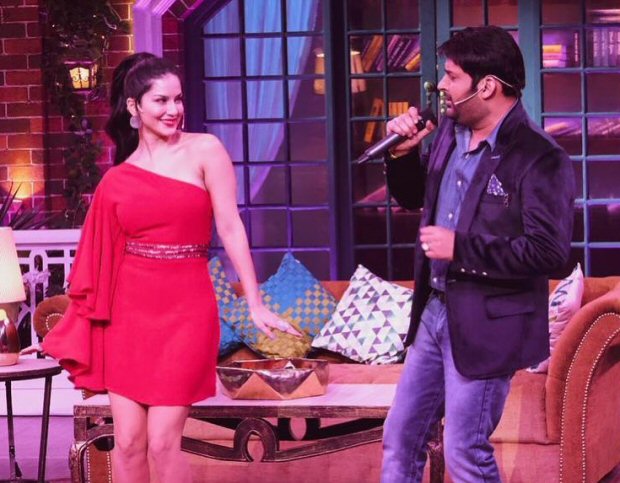 The proof of it is the recent post shared by Sunny Leone on her Instagram page. The actress posted a picture of her in a red dress from Ahmad Couture when she was a part of the show. Readers may be aware that The Kapil Sharma returned to the small screen this weekend. This New Years, the comedian turned actor will be kicking off a new journey on television with this show that also features Krushna Abhishek.

Sunny Leone took to social media to post pictures as she danced and had fun on the sets with Kapil Sharma and colleague Krushna Abhishek. It is yet to be seen if Sunny will be coming to the show with any particular promotions or is it just to support Kapil and his new endeavor. On the work front, the actress is concentrating on her entrepreneurial ventures and her big budget South film Veeramadevi which features her in the role of a warrior princess.

On the other hand, coming to Kapil Sharma, the comedian turned show host is also having a rather amazing year on his personal front as he is all set to start his marital journey. As for the show, two episodes of the same have already gone on air and it features some old members like Sumona Chakravarti and Kiku Sharda and it has some new additions like Bharti Singh and Krushna Abhishek. Navjot Singh Sidhu too will return to this show in this new season.

Also Read: Hot Alert! Trust Sunny Leone to charm the pants off you as the December cover girl for Just Urbane!