Sunny Deol, who has been in the industry for quite some time, is all set to launch his elder son Karan Deol in Bollywood this year. Sunny, who has also ventured into production and direction, is busy with his son’s debut Pal Pal Dil Ke Paas. Amidst this, he took to social media to share the cutest birthday wish for his son Karan aka Rocky. 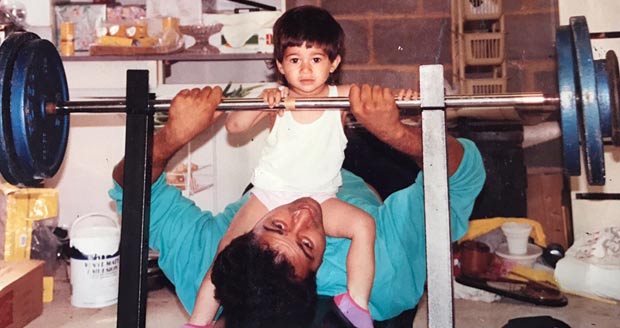 Sunny Deol took to Twitter to share a throwback picture of his younger days and when Karan was a toddler. The picture featured, our ‘daai kilo ka haath’ hero posing with dumbbells and Karan seated on him. The cute picture captioned best wishes from Karan’s father, “Happy Birthday Rocky.” We wonder how Karan got his nickname!

Coming to Pal Pal Dil Ke Paas, the film is directed by Sunny Deol. After much auditions for the leading lady, the makers eventually locked newbie Saher Bamba who will be making her Bollywood debut opposite Karan Deol in this film. As the name suggests, the film is a romantic drama that has been extensively shot in North India. The release date of the film is yet to be revealed.

On the other hand, 2018 has been an interesting year of Sunny Deol whose two films, caught in crisis, finally saw the light of the day.  Bhaiaji Superhitt, also featuring Preity Zinta, Ameesha Patel, and Arshad Warsi amongst others released last week after being stuck in the pipeline for almost five years owing to financial crisis. Followed by that, Mohalla Assi, starring Sakshi Tanwar, too released earlier this month after it fueled up religious controversy owing to the subject of the film.