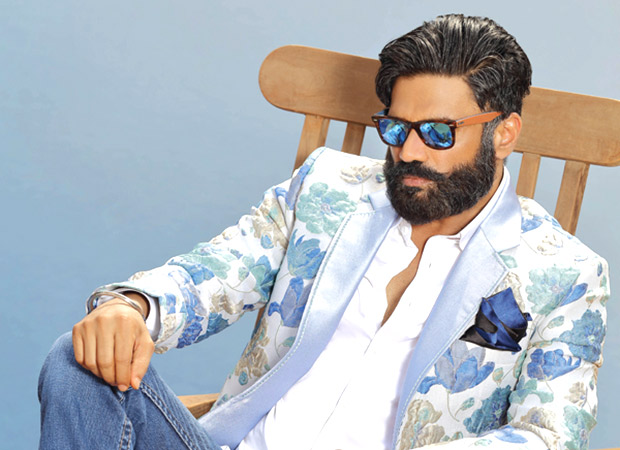 Suniel Shetty is back in the news. Posters and promos of his TV show India’s Asli Champion on And TV are blasting at full speed and you can’t help but notice them. He is getting compliments like ‘Hot’ for his awesome physique and he doesn’t look like a 55 year old man from anywhere. Bollywood Hungama’s Faridoon Shahryar caught up with Suniel on the sets of India’s Asli Champion in Goa recently and came back impressed with the amount of hard work that Mr Shetty is putting in combating 45 degree Celsius temperature and extreme humidity. Mr Shetty’s father passed away at the age of 90 on March 1 and it was only after the unfortunate death in the family that he decided to get back to work with a vengeance. Apart from the TV show he will also be seen in Reloaded with Siddharth Malhotra and Jacqueline Fernandes. He is also doing a silent film. When asked how the demise of his dad has impacted him, Mr Shetty actually broke down. This is what he said.

“You are one of the first who has touched the nerve that hurts the most. I haven’t been working for three and a half years and I hated work. I don’t know what happened to me. Somebody who has worked for 25 years with 125 films and suddenly to hate work was funny. Whenever Asif my secretary came with work I said, nahin karna hai. I didn’t understand why I was doing that. March 1, my father passed away and everyone started coming to me that why am I not working. I analyzed that dad was ill for three and a half years, he was bedridden. My anger was that I can’t go to meet him, I am out, shooting, it is time for his physio, what am I doing, three months I am out of home. I think I received a message from him via satellite that ‘son spend time with me, I need you’. He couldn’t speak. I have always lived with my parents, never left them and gone anywhere (breaks down, cries). I would leave anything and everything for them. That was one moment when I realized parents without saying anything can say so much that they impact you so much. That’s what my father did. The day he passed away, there was best of films, this television show, suddenly there is so much buzz as if I am being launched. I am getting embarrassed that everyone uses words like Hot and physique. Physique hamesha thi yaar. It all came back in terms of blessings from my father. I lived my whole life with him, not a single day without him. I never moved to the suburbs. I used to travel to work three four hours to shoot every day. But I wanted to go back to my mother, to my father. My wife, a Muslim background, me a Hindu boy, South Indian family, how will she adjust but she lived all her life with her in laws. For my father his daughter in law was his life. It has affected all of us very badly, the children, everybody. Everybody goes through in life but when you go through it you realize Holy Shit yaar, this is what it feels.”