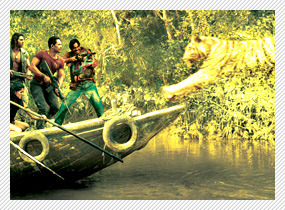 Based on a few shocking incidents that involves man eating tigers, Abis Rizvi plans to capture these life threatening events in his film Roar - Tiger of the Sunderbans. The film is an ode to the beauty and terror that the royal tiger of the Sunderbans instills in people.

Certain shocking incidents like the death of a fisherman by a tiger, an old woman killed by a crocodile reminded Abis of an old incident. Recalling those memories, Abis said, "Reading about this unfortunate incident took me back to our Sunderban's shoot where we were a crew of 150 staying on ships for 40 days and shooting in the core territory. It's an amazing dichotomy that such a heavenly location had the smell of danger all around us."

Incidents like these that reflect the power struggle between man and beast is the premise of Roar - Tigers Of The Sunderbans, a film by Abis Rizvi and Kamal Sadanah. The film is an ode to the beauty and terror that the royal tiger of the Sundarbans instills in people.

Produced by Abis Rizvi Films, Roar - Tigers Of The Sunderbans is slated to release in India on September 5.