Varun Dhawan and Anushka Sharma are coming together for the first time for YRF's next titled Sui Dhaaga– Made in India. The duo has undergone a complete makeover to get into the skin of their characters. The shooting began in Chanderi last month and we even got a glimpse of their looks.

This past weekend, Anushka Sharma and Varun Dhawan announced the wrap up of their first schedule. Varun shared a boomerang video on his Instagram story with Anushka as they were returning home from Chanderi. Both of them looked pretty excited to return to Mumbai after a month-long outdoor schedule. 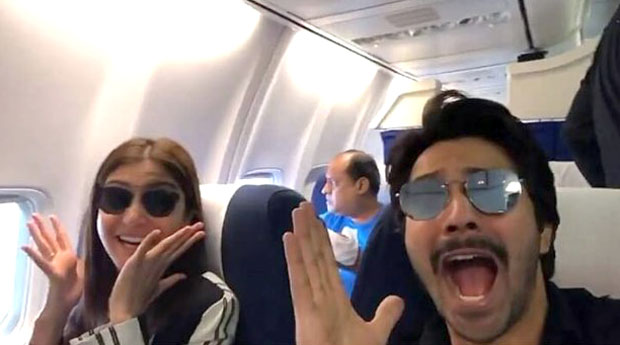 Recently, it was reported that Varun Dhawan had sustained an injury on the sets of the film during a stunt scene. The actor apparently suffered a deep cut on his forehead while falling down a flight of stairs. The actor insisted on performing the scene himself instead of taking body double’s help. But, Varun assured that he was doing just fine after getting proper medical aid.

A film about finding love and respect through self-reliance, Varun and Anushka starrer Sui Dhaaga – Made in India is a heart-warming story that is rooted in the Indian milieu and celebrates the spirit of self-reliance. The film’s plot is inspired by the hugely acclaimed Make in India campaign.

Directed by Sharat Katariya, Varun Dhawan will be seen as a tailor and Anushka Sharma is as an embroiderer in Sui Dhaaga- Made in India. They have been paired for the first time and are definitely the most-awaited on-screen jodis of 2018. Yash Raj Films’ entertainer is set to release on September 28 this year, right before Gandhi Jayanti.