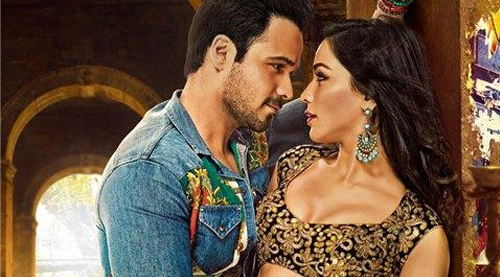 after he catches him necking with Pakistani bombshell Humaima Malick in a lift in Cape Town.

These inhouse jokes, I tell you! They are the life and death of a certain kind of cinema where the script has to be far

cleverer than the audience. In Raja Natwarlal, a con caper with a lot going for it at least on paper, Hashmi has

little to do that could catapult him to the next level of his career. He swings along in the low tide of this film's too-

clever-for-its-own-good plot, happy to play the "lovable" (giggle!) con-man who chances on a scam much bigger than he had

Rawal, giving a terrific shape to his ill-defined role) and a business tycoon in Cape Town named Vardha (K K Menon) whose

passion for cricket makes him a sitting duck for a cricket scam masterminded by the aforementioned con persons who, like

the script, is not half as clever as he'd like to believe. Hence entire banks and automobiles are sham-constructed within

hours to dupe the kingpin villain.

Watching Menon fall into the facile boobytraps laid down by Hashmi, Rawal and their accomplices we soon know why a fool and

his money are parted before we can say 'Subrato Roy'.

Like a woman during her time of the month, the script here has its good and bad moments. While the basic premise of getting

the better of a powerful adversary works, some of the individual components in the plot such as the pre-climactic set-up

where K K Menon's character is properly had, makes us wonder how a man who has accumulated billions can be so dumb.

Love does it to a lot of smart people. Here it is cricket. Director Kunal Deshmukh had earlier described the complex

affinity between cricket and avarice in Jannat. To its credit it must be said that Raja Natwarlal is a far

The narrative never slumps in its interest-level, though a lot of times the material doesn't permit the characters to rise

above the limitations imposed on the material by the caper genre. Every character must perforce wear many masks. Nothing is

what it seems. Everyone has a wink and smirk hidden under the sleep surface. And every character is finally in it for

You may not be convinced by some of the more steep twists and turns in the plot. But the actors go a long way in concealing

the inconsistencies in the storytelling. While Paresh Rawal, K K Menon and Deepak Tijori (in an endearing cameo) add to the

ghagras in her dance-bar numbers, with expressions to match.Is this really the actress who wowed us in Shaoib Masoor's Bol?

Sassy and slick, Raja Natwarlal is a con caper done up in playful shades and mischievous flavour. It's enjoyable

while it lasts. But you don't come away with anything besides the feeling that the material should have carried for heft.

If only everyone was not busy being someone they are not.