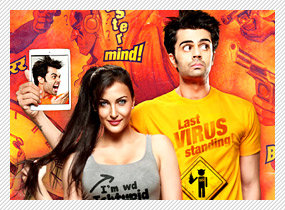 Ah, it takes all sorts! Especially in this day and age of instant information;

who knows what you might run into on your computer? Mickey Virus is Bollywood's first

full-fledged film on the virtual world. The hero - if we may call Manish Paul's languid lazy

vagabondish character that is of a computer hacker, and one who likes to take his time over

every punch of the keyboard. He is a bit of a bum, you know! Mercifully debutant director

Saurabh Varma's film moves in a mood defiantly opposite to the hero's indolent indiscretions.

hackers' hemisphere into the hectic mode.

progression of this slickly-executed cyber-drama. Alas, I am not as equipped as our debutant

electronic jargon. Never mind! Even if your familiarity with the virtual world is minimal,

Mickey Virus makes for enjoyable viewing. It's voguish vibrant, vital and viral, and yet

in love and falls into a cyber-trap and hits his head into a scam that could destroy his life.

Costa-Gavras on a Shoojit Sircar mission? To reveal any more of the plot would be akin to giving

away the film's USPs. Suffice it to say that the debutant director knows his cinema as closely

as he knows his computer. He weaves cinematic elements into a kind of one-night-in-the-life-of

... tale that spins in dizzying motions.
If Sudhir Mishra had made this film it would be titled Iss Raat Ki Cyber Nahin.

Delhi, that favourite sheher of many recent, decent and indecent, dramas and thrillers,

is again caught in sinister provocative postures. The roads and lanes, Nehru Place or a chowmein

outlet, every outdoor location has a story to tell. Strange, how Manish Paul, switching

appearance that is dangerously close to Ranbir Kapoor's Sid-meets-Besharam act, pulls out all

stops to make Mickey look real to the point of being your next door neighbour's son, much in the

same way as Ayushmann Khurrana. Only, Manish is goofier, more adventurous in his exploration of

adrift urbanite. He is undoubtedly an interesting actor with an unpremeditated screen presence.

computer, then too many rehearsals are sure to spoil Manish Paul's camera-friendliness. It

remains to be seen where Manish Paul takes his wastrel's insouciance next. Mickey Virus

fluidity. There is also a cutely written romance woven into the hacker's tale. Eli Avram

currently locked away in Bigg Boss house shows up as a manifestation of... well, Manish

films! For a newcomer to shoulder a thriller adeptly there must be some accomplished actors

around him for support. Manish Paul, lucky sod, gets his namesake Manish Choudhary as a stern

Choudhary is in fine (uni)form. But the very talented Varun Badola as Choudhary's assistant is a

what's written for the character. The rest of the supporting cast too gets into the mood of the

around Delhi's cyber stratosphere. The uniqueness of the plot works effectively in covering up

plot. It does get far-flung. But the leaps are made without fractured bones.

way for Manish Paul and his director Saurabh Varma to start their careers. This is an oddball of

a movie that tries to make sense of the senseless whirligig of urban internet-driven lifestyles.

What the 'hack'! Just go out there and have fun.

Dulquer Salman’s 5 films to see and the one…

Celebrating the resilience and story of…