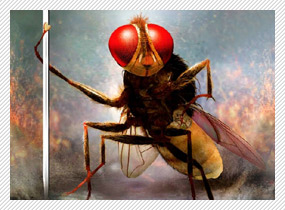 This is a love triangle with a twist. It's a story of a man, woman andâ€¦a fly! By now we've all heard of Rajamouli's Eega cracking box-office records in Tamil. The Hindi version comes to us with a tremendous pre-release expectations. Shall we just saw, we were Eega to see this film?

Makkhi doesn't disappoint. Not by a long shot. It's a fiercely original and engaging piece of cinema replete with special effects that endow human qualities on a fly, making it a cool tool of vendetta.

Yup, the fly creates quite a buzz! Especially around the film's antagonist Sudeep's ears, as it tortures the yell out of the villain who had bumped off the leading lady's angelic suitor, little realizing that he, the suitor, would be reborn as a fly.

On paper Makkhi must have sounded like a corny adventure saga about a fly's vendetta spree against a man who would go to any lengths to win over a girl who rebuffs his every gesture. Sudeep's effectual destruction by the fly has to be seen to be believed. To bring variations into the fly's various means of torturing his adversary to death requires Herculian plotting and planning. Director Rajmouli excels in giving a human life to the fly.

In spite of the inherent repetitiveness of the concept (in how many ways can a fly...er, fly?) the narrative's pace never slackens. The special effects are incredibly adept. Full marks to Kannada actor Sudeep for creating an exacerbated tension in a fight that is unequal from Round 1. Interestingly as the fly-hero's vendetta intensifies, Sudeep's character begins to appear comically vulnerable. By the time he gets unequivocally murderous we share Sudeep's sentiments completely.

In theory it's a very shaky plot on which to build a whole film. Rajamouli's sure-handed direction puts a zing into the buzz. There is no dearth of innovative moments in the script. The sharp clenched narrative doesn't let go of a single occasion to allow the fight to finish between the fly and his killer.

Honestly, who would expect a film entitled Makkhi to fly like a bird? Rajamouli's ingenious idea and skilfull storytelling take us completely by surprise. Gutsy sly and original, this is the entertainer of the season. Not only is Sudeep in top form, even Samantha Ruth as his object of adoration is sweetly effective.

Another unmistakable plus is M M Kreem's music. The songs come on at opportune spaces in the storytelling. The background music nails the funny-sad-daring plot. A word about the Hindi dubbing. It's so well-synchronized with the original Tamil dubbing that nothing is lost in translation.


Besides, a fly really doesn't speak. And it is the hero of this cocky clever and compelling film.

This may not be the classic waiting to be re-discovered But Makkhi holds our attention right to the end. It is a conventional love story turned into a ferociously innovative saga by one masterstroke. By the end of it we no longer wonder, why a fly? We're too busy cheering the fly which knows its mind better than Peter Proud ever did.