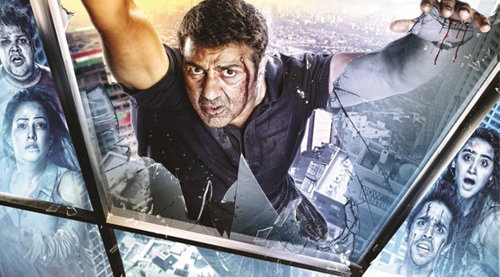 something remarkably well-packaged over here.


Wrong! The second-half comes on like a tornado to wipe out all the good that is achieved earlier. And initially there is plenty that is done with edge-of-the-seat heart-in-the-mouth adeptness as we

are introduced to our hero 14 years after he was incarcerated for killing Balwant Rai, played by Amrish Puri in the 1990 hit Ghayal.


New era, new villain, but same hero. This time Ajay Mehra, older and far more distraught than he was 14 years ago (he is psychiatric medication) takes on a corporate tycoon named Raj Bansal, played

by Narendra Jha who was so compelling as Tabu's missing husband in Haider. Here, the rhythm required from Jha is different and he tries hard to find his bearings.


It's a solid premise for a battle between Good and Evil were the lines of morality are so sharply drawn that we should get sucked into the conflict without even trying. There are two key action

sequences centered in a shopping mall and a hurling train, each lasting for 15-20 minutes each, that leaves you spellbound. Sunny Deol, the action star is alive and, yes, kicking.


Then the terrible curse of the second-half descends on the film rendering it ineffectual, unconvincing and finally destroying the impact of the end-product. By the time we discover that Ajay Mehra


The climax has Sunny Deol mimicking Arnold Schwarzenegger's chopper-crash-landing-into-skyscraper act. The entire exercise is so clumsy you wonder if Sunny Deol ran out of ideas or funds. Or maybe

While the overall product is a casualty of a massive mess-up, there are commendable factors guiding the narrative in the first-half. The voice against corruption, though, shrill is effective. It is

not hard to believe that Sunny Deol truly cares about the nation's morality hitting rock-bottom. The film has a conscience. It raises and tackles issues of corruption in deftly edited scenes in the

first-half. But Ghayal Once Again finally becomes a victim of its own kind of corruption where the writers (Vishal Vijay Kumar, Sanjay Masoom) get lazy, the action gets sluggish and the hero

simply doesn't know what to do with his anger any longer.

and Om Puri in ill-written roles that seem to have potential which is never realized. A newcomer Shivam Patil playing Deol's Ajay Mehra's fan shows some screen presence.


Sunny Deol's fans won't be unhappy though. He uses the dhai kilo ka haath effectively enough. Strangely the action scenes don't have proper entry points for the hero. He just walks in to the

action when it reaches a feverish pitch like a spoilt superstar arriving for shooting after the shot is fully set up. This is indicative of the way the minds behind the film work. They want to keep

the action on a normal and believable level. But somehow at the end of the ride the intended bang transmutes into a loud whimper.