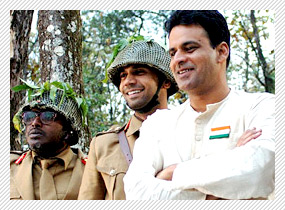 Right away, Chittagong, taking its title from that scenic lush-green spot in Bangladesh where a band of brave boys took on the British Raj

and gave it a run for its money, must be praised for taking a slice of relatively-unknown history (not counting Ashutosh Gowariker's poorly-received film on the same

Chittagong is the real thing. Bravely bonafide and not afraid to show a humane side to the Britishers without taking away from the heroism of the Freedom

Fighters, the film packs in a great deal of cinematic moments in less than two hours of playing time. Its beauty is more by decree than design, less self-conscious than

We see the verdant hamlet in Bangladesh, beautifully captured by cinematographer Eric Zimmerman, as a mysterious sinister area of insurgent activity. Debutant director

Bedabrata Pain lets the weight of his rigorous research sit comfortably on the narrative. The patriotic fervour is never allowed to weigh down the characters. Every

member of Masterda (Manoj Bajpai)'s rebellious gang comes across as a sharply etched character whose patriotic pride couldn't hide the all-too-human side.

There is a tender romance tucked away in the narrative between Nirmal Sen (Nawazuddin Siddiqui) and the comely plucky girl who eggs him on from the sidelines. Their

courtship doesn't come to a happy ending. But at least they tried.

The film is done with a smiling nod to the spirit of romance during times of ferocious desh-bhakti. It's almost like a tribute to the war-and-love themes of Gabriel

Sadly Chittagong never allows itself to get passionate about patriotism or love. For better or worse Pain keeps the emotions firmly reined-in. Except for some

portions of manipulative background music, the narrative eschews over-statement, and opts for a gently persuasive approach that serves the film's valorous theme in good

Shankar Mahadevan's expressive voice sings out Prasoon Joshi's sturdy poetry with robust impact. There is a poetic element running through the film, as though the

world that Pain creates so diligently would topple over if the Freedom Fighters didn't seek another kind of freedom before duty beckons.

The entire uprising in 1930 is seen through the eyes of a boy-soldier Jumku played with wonderful understanding innocence and wisdom by Delzad Hilwale. The boy is a

valuable discovery, on a par with the best juvenile performers we've seen recently. Manoj Bajpai in the central role of Masterda is surprisingly restrained. There are

many episodes where the actor would have fornicated with flag-waving flamboyance. In keeping with the film's mellow mood Bajpai chooses understatement. Nawazuddin

Gangs Of Wasseypur.
Long live the upsurge of acting talent that has taken over Bollywood. Now if only the 100-crore club could accommodate talent alongside star-power.

The relationship that develops between Jumku and the British officer (Barry John, perfectly pitched to portray the dilemma of a Britisher caught between duty and

emotion) reminded me of Paan Singh Tomar and his senior officer in the army. Sometimes two unlikely souls divided in their loyalties cross the border to mingle

Chittangong doesn't portray the Britishers as only ogres and sadists. Thank Goodness for some restraint in the conflict. For cinema to accommodate history there

must be a sense of balance between drama and authenticity. Chittagong manages that balance quite well. One misses the sharp high points of drama that constitute

the historical epics in Hollywood by, say, David Lean. Bedabrata Pain. I suspect, doesn't strive to create history, he recreates it.