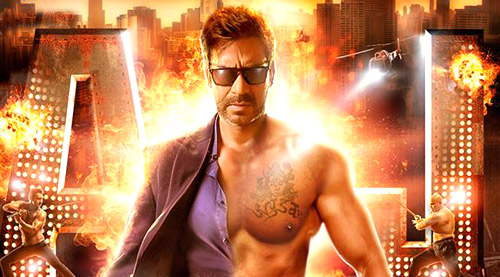 Officially, there are two comic relief providing actors in Action Jackson .The very talented Kunal Roy Kapoor, here reduced playing the hero's cretinous sidekick whose sides get kicked in every frame, and Sonakshi Sinha who spends a good part of the first-half ogling at her leading man's power-point...and we don't mean his fists which speak louder than his words....really, loud.


Decibels are so high, they could split eardrums provided you can stay put in your seat through the ordeal. The very talented Sandeep Chowta provides helpful pointers in the background score: 'Vishy Vishy' goes the score when Devgn is on the screen. 'Bangkok Bangkok' is the chant on the soundtrack for those who like their locations well mapped.


The question that arises after watching Devgn and Devgn (yes, there are two of him) plus girls guns gore and garbage, is...what is Action Jackson about? Is it a tale so deep that we perhaps confuse the trees for the wood? Or inversely, is it a tale so shallow and crass that it parades bombastic and brash tripe as mass entertainment? Tragically the latter option repeatedly stares into our face. There is no mistaking the motivation behind the mayhem and melodrama.


So far Prabhu Dheva's films may have been guilty of strutting a lowbrow idiom as an antidote to highbrow tedium. Action Jackson changes the rules radically. This is a new aggressive Prabhu Dheva who not only strives to make Ajay Devgn, giggle giggle, dance Prabhu also wants to portray the women characters as lust machines.


In the second-half when all hell breaks loose Marina's sex drive is so intense it makes her a bestial bitch. In the climax she is understood to be groping the good girl (Yami Gautam) whom Devgn 2 (or is Devgan 1???) loves before drawing, "Tum mein kya hai jo mujh mein nahin."

How about some self-control?


Incidentally Ms Mamgai smokes almost non-stop to show how evil she is, accompanied by a scroll that says smoking kills. Yami holds a baby in her hand. No scroll, saying how wonderful babies are for the health. Alas.


Yami gets her head bashed in by the goons Ghajini style(wonder what the censor board was doing about their no violence-against-women-not-even-a-slap policy) while Manasvi seems to have all the fun, thanks to a brother who looks like a cross between Frankenstein's monster and Gabbar's great-grandfather, and who makes sure every wish of his sister is his command.


These two siblings must have made their parents proud.


Ironically there are women of every age playing traditional roles....mother, sweetheart, vamp...Sadly the script is so coiled and twisted in its desire to subvert the massy cinematic language that we end up looking at a grotesque masquerade featuring time-tested characters and episodes in bewildering situations.


There are hideous interludes of fights and dances. The fights are sometimes extended into a comedy and the comedy sometimes ends up in a fight. It's all a painfully prolonged homage to kitchy cinema with the kitsch element so pronounced and tangy in taste that you really don't know who's taking whom for a ride.


Or, as Sonakshi (looking very pretty even when indulging in naked voyeurism) puts it at one point, "I've turned Singham into chewing gum."


Dare we say, Prabhu Dheva has turned the double role into a psychedelic double-vision. What we see is certainly not what we get.