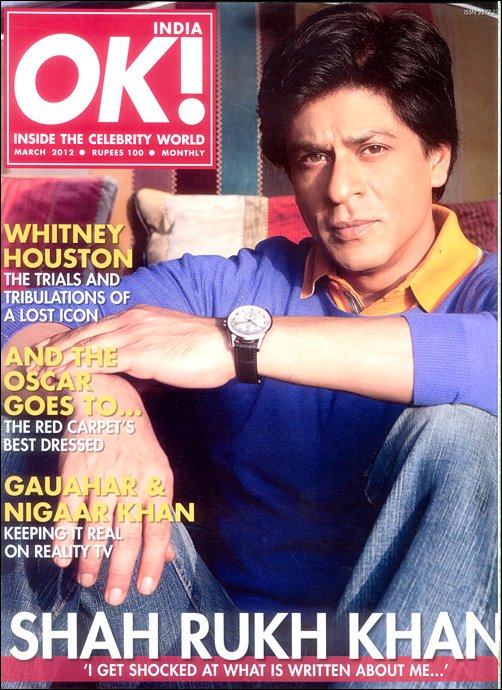 Shah Rukh Khan... alias SRK is not just hot, hotter and hottestâ€¦ he is above all of that! And if at all there

was any other degree of comparison, he would have made even that degree seem like a dwarf in comparison. One

look at his career graph and one wonders if at all there is really something that this man has not attempted. Be it

films, TV, ads, sports, production, hosting award shows and even posing as the cover boy for magazinesâ€¦ you

name it, he has done it! In the latest issue of OK! magazine, he has attempted the same thing for one more time, by

In this issue, he talks about many things that are indeed a pleasure to read. He goes on record to say that "I come

from an upbringing in theatre, where guys, girls, homosexuals, heterosexuals, bisexuals are all happy with each

other". He also touched upon the (in)famous altercation between Shirish Kunder and himself. And for all the

inquisitive lot, he actually goes onto give a detailed download of what his typical day looks like and his hopes from

IPL this year. Amongst all the other things, he also speaks about the rumors involving Priyanka Chopra and

All in all, with summers just getting hotter by the day, we are sure SRK will surely make his fans sweat even more

with his heat quotient. However, we are sure that all his fans will be OK! with it (no pun intended!).