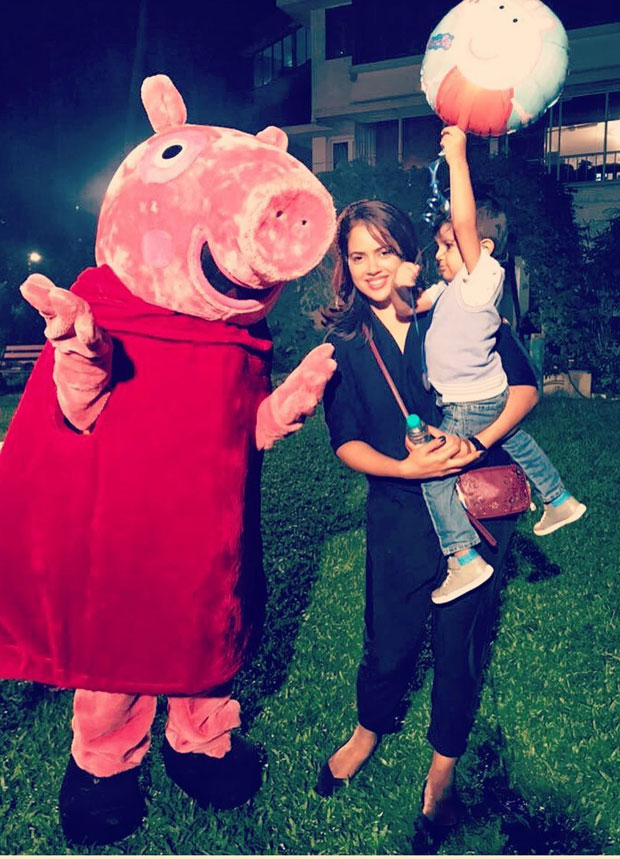 The name ‘Sameera Reddy’ may probably not ring a bell anymore; may be because the actress vanished after finding the love of her life and settling down with him. Like many actresses, she opted to stay away from limelight post tying the knot to businessman Akshai Varde and is now happy spending time with her family which now also includes her two year old son Hans.

Although we aren’t sure if Sameera Reddy is planning to return to the glitzy world of Bollywood, the actress is definitely making her presence on social media. The actress is seen constantly sharing updates on Instagram and recently posted picture of her spending fun time with her son Hans.

She posted this picture of her kid who seems to be awestruck by Peppa Pig [a popular animated character] and even captioned the same saying, “When Peppa Pig is the ultimate celebrity friend to have cos only that makes you a star for your 2 yr old !!!” We must say that the actress did have a special kind of glow probably from happiness.

Sameera Reddy, who made her debut with Salman Khan’s brother Sohail Khan in Maine Dil Tujhko Diya, has been a part of many Bollywood films like Race, Taxi No. 9 2 11 [Nau Do Gyarah], Musafir, Darna Mana Hai among others and has also done quite a bit of South films. Her last Bollywood film was Tezz starring Ajay Devgn and Kangana Ranaut that released in 2012.