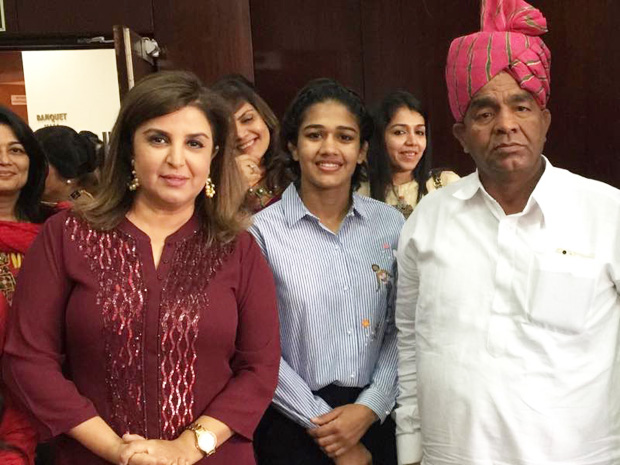 Known for her role as a choreographer to filmmaker off screen, Farah Khan has also done a lot of contribution as a host of some varied genre of shows. The multi-talented Khan was now conferred with the FICCI Ladies Organization (FLO) Icon award for her ‘contribution to the entertainment industry’ at their annual session held in Delhi on April 14, 2017.

In fact, Finance Minister Arun Jaitley presented the award to Farah Khan on the occasion. The filmmaker, along with other distinguished celebrities including Anita Dongre, Renu Sud Karnad, Pratap C Reddy and Mahavir Singh Phogat were also awarded. Besides this, Farah also met with the real life Dangal family which was Mahavir Phogat who was present at the event along with his daughter Babita.

The Gender Parity Index (commissioned jointly by FLO and FICCI) evaluates gender diversity and empowerment of women in the formal sector and the progress made over the years.

Kiran Gera of FLO says, “We found Farah to be the only woman from entertainment who is as successful and powerful as Yash Chopra. She comes with a clean image and yet, is very earthy. Farah has come up from scratch and sends across as a powerful message of being a woman of respect, prestige and honour.”

Sanjay Kapoor celebrates 25 years of his…