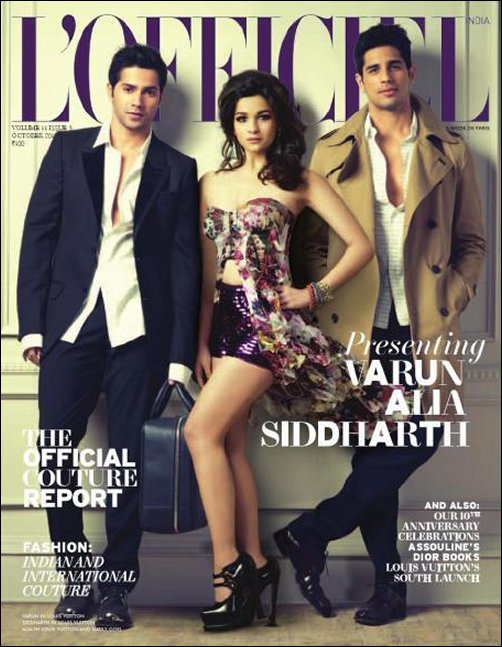 October 19 is the date when Karan Johar's college caper Student Of The Year will release, and also launch three young actors in Bollywood namely Varun, Alia and Sidharth. This trio also features on the cover of the latest edition of L'Officiel.

In a world where people are ready to give their right arm for even a minuscule role in a KJo film, here these three young actors are making their grand debut in KJo's SOTY. They always say that 'Do not judge a book by its cover'. Well, if the cover is as royal and grand as this one, then, we one will surely like to judge the book ONLY by its cover! Needless to say, the cover featuring the three hot debutantes is as glossy and classy as any quintessential Karan Johar film! While in the film, Alia Bhatt is being flanked by the two hotties (Varun and Sidharth), the cover is no different. Alia, who looks a million bucks with an attire to match her persona, has the smart dudes (Varun and Sid) on either side for company.

This issue is indeed a (fashion) collector's edition. Not to be missed.