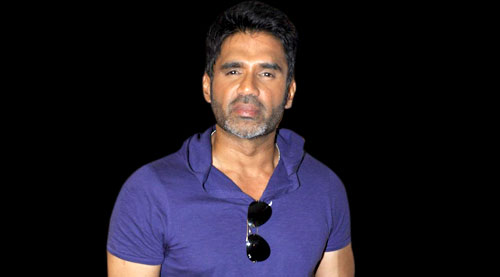 Suniel Shetty is naturally a worried man. Never one to bother with his own career Suniel is deeply concerned about daughter Athiya's acting debut in Nikhil Advani's Hero .

However, he has left all the nitty-gritty of Athiya's launch to Salman Khan, who apparently is sparing no expenses to make sure this Hero does for Sooraj and Athiya what the original Hero did for Jackie Shroff and Meenakshi Sheshadri.

Says Suniel happily, "Salman Khan is pampering my daughter and Sooraj silly. He is like an indulgent parent who won't stop at anything to make his children happy. He is allowing Nikhil Advani access to any and everything he wants. It could be one day's shooting in England or three days in Romania... it could the most expensive car in the world for one shot... Salman Khan doesn't deny the Hero team anything."

This is why Suniel Shetty has left his daughter's entire karma in Salman's hands. "I've nothing to worry about. Even if I had produced my own daughter's film I wouldn't have been able to do what Salman Khan is doing for my daughter and for Sooraj."

Suniel has seen an hour of the complete film and he can't stop raving about Sooraj Pancholi. "Every frame is like a painting and Sooraj is a going to be a Star. What screen presence and such expressive eyes! All that Sooraj has gone through in the past couple of years has added to his growth as an actor."

When asked to comment on Athiya's screen presence, Suniel protests, "How can I say anything about my own daughter? I'm too close to her to be objective."