Last Updated 24.09.2021 | 9:36 PM IST
feedback language
follow us on
Bollywood Hungama » News » Bollywood Features News » Sonam does a Rekha, but in her own way 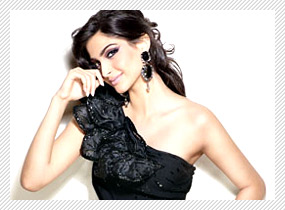 Sonam Kapoor is currently shooting a remake of Hrishikesh Mukherjee's Khubsoorat were she plays Rekha's role.


Enthuses Sonam, "Rekha Aunty's character was so beautiful. We wanted to recreate it. We've just taken the core idea of the original and completely reworked it. And I really wanted to work with the director Shashanka Ghosh. He is a genius."


Sonam is riding high after the success of her last two films Raanjhanaa and Bhaag Milkha Bhaag.


Some of Sonam's recent films including the ambitious Mausam directed by Pankaj Kapur, sank. But Sonam says she was not discouraged. "I love my job. I love acting and keep pushing myself to improve. I am a very positive person. I don't want to be the no.1 star. I just want to be known as a good actor. Every director I've worked with has helped me grow as an actor. Saawariya with Sanjay Bhansali, Delhi 6 with Rakeysh Mehra were important, so were I Hate Luv Stories and Aisha. People loved me in these two films. In fact Aisha gave me the image of what you call the fashionista."


Sonam admits she has been learning acting on the job. "I am not a trained actor. I learnt the basics of acting while doing Saawariya with Mr. Sanjay Bhansali. So he was my acting guru. I don't follow any technique. I just flow with my character. That's what I did in Raanjhanaa. I surrendered to my director. It was both exhilarating and terrifying. Because I really didn't know where I was heading."


Sonam admits she loves the image of the fashionista. "I love dressing up. I like to put on beautiful clothes. For me it is important to look my best. Its part of the way I am. But it's also an image, and an image that I hold precious to my heart. I don't make an effort to be considered fashionable. I think a partiality towards tasteful dressing comes naturally to me."


Sonam looks forward to working with her father Anil Kapoor. "Who wouldn't want to work with one of the finest actors we have? But there's nothing on the anvil yet."