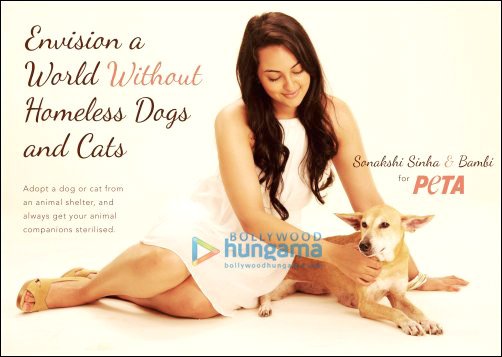 While Sonakshi Sinha has the much awaited Once Upon Ay Time In Mumbai Dobara ready for release, on the other hand, she shows her human side by featuring in new PETA (People for the Ethical Treatment of Animals) ad.


This ad has the petite Sinha girl with the caption "Envision a world without homeless dogs and cats. Adopt a dog or cat from an animal shelter, and always get your animal companions sterilized". This ad has been released just in time for International Homeless Animals Day (August 17). The ad has been shot by leading photographer Russi Modi and her hair and make-up was done by Nileysh Parmaar.


Not many know that Sonakshi has been a long-time supporter of PETA India, and since her college days, she has been rescuing animals - including her beloved dog Nancy, whom she lived with for 14 rewarding years. Talking about the noble cause, she said, "Breeders, pet stores and people who don't sterilize their animals are responsible for all the animals who end up homeless. Every time someone buys a dog or cat from a breeder or pet store, a homeless animal roaming the streets or waiting in an animal shelter loses a chance at a home and a good life."

Tags : Once Upon Ay Time in Mumbai Dobara, People for the Ethical Treatment of Animals, PETA, Sonakshi Sinha