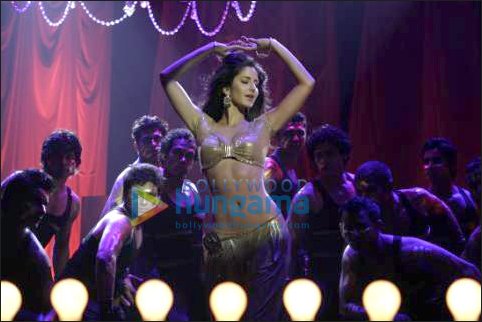 After losing oodles of weight, learning belly dancing and letting her hair down, Katrina Kaif's performance in Tees Maar Khan would be something to look forward too for sure. Farah Khan has pushed the pretty woman to look, feel and perform like never before. While the clip of the film's title track is getting raving reviews, Kat's look is smouldering as well. After all, she is doing the 'jhatka and matka' in typical Farah style for the first time.

On public demand, Farah put up this pic of Katrina's from the song 'Sheila Ki Jawani' on twitter. Tweeted Farah, "As promised sending u pic of Kat, maybe bit dark on phone toh comp pe dekhna.wow I'm advising technology." As soon as the picture went live, Farah was overwhelmed by the compliments she received.