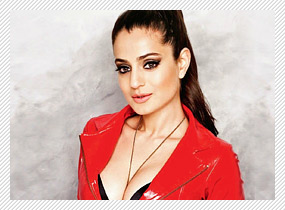 Ameesha Patel had enjoyed one of her most definitive roles in the form of Abbas-Mustan directed Humraaz. Though she did go on to work in thrillers like Vaada, Elaan and Race 2 in years to follow, the impact was missing. If Ameesha is to be believed, this could well see a turnaround with Shortcut Romeo which, despite not being set in a mode and manner similar to that of an Abbas-Mustan whodunit, would still throw a solid punch.

You seem to be enjoying your return as a lady with negative streaks to her characterization.


For starters, there is no hero or heroine in Shortcut Romeo. If at all one has to still slot anyone like that then well, both Neil as well as I are heroes in the film. While Neil is fantastic in the film, I too am carrying numerous shades comprising of black, grey as well as white in my characterization.

Can you please elaborate?


There is this very spicy cat and mouse game between Neil and me in the film. It is all done in a very local and a massy way. It is a brilliantly made suspense thriller. Frankly, it is the 'baap' of Humraaz in all departments.


Yes (smiles). When our director Susi Ganesan made the Tamil original Thiruttu Payale, and that too with newcomers, it released on the same day as a film which featured Ajith, who has been a reigning star down South. Still, it went on to be the third highest grosser of the year. So you can well imagine how powerful the content must have been. He has been a First Assistant Director to Mani Ratnam and is technically very strong too. His shot taking is superb and there are some wonderful special effects. Moreover, it is an expensive film as well for the kind of setting it has. It is a very different film for me too.


Well, you would see a very different Ameesha in Shortcut Romeo. Yes, there is loads of entertainment as well as twists and turns galore. However, they are not the kind that are seen in Abbas-Mustan films. They are interesting and charming in their own way.

You did try to be very different in Race 2 earlier this year. In the hindsight do you think you really needed to play that role?

Why not? I got some phenomenal response from all over the world. Even today when it plays on T.V. then it immediately gets a smile on everyone's face. See, Cherry could have been an annoying character and turn out to be really irritating as well as vulgar. Instead, it turned out to be sweet. The entire seductive act that I put together with Anil Kapoor didn't look foolish.

Don't you miss being presented in an ultra stylish avtar though?


What's so special about stepping out of helicopter in a high speed shot and then walking in a slow motion? It is an easy thing. There is no challenge in there at all and every actor can do that. It is performance that matters while looking good. Today so many out there in the industry have been telling me that I am looking my best ever. (Laughs) Guess my grandmother's genes have been passed on to me. Moreover, I am not into any heavy duty drinking. I don't smoke. I surround myself with positive people and clean thoughts. I have my educational background to keep me grounded.

You don't seem to be flying high in a relationship either, right?


(Smiles) Yeah, I don't have a partner yet; I am yet to select him. In fact I haven't had time to even meet my friends. With such a schedule, I don't have any time for any relationship because I know I can't do justice to it. But yes, never say never. Tomorrow when the right guy comes along, who knows what I feel then. One thing is for sure though that I won't hide my relationships. I have never hidden my personal life in the past; I won't do that in future either.