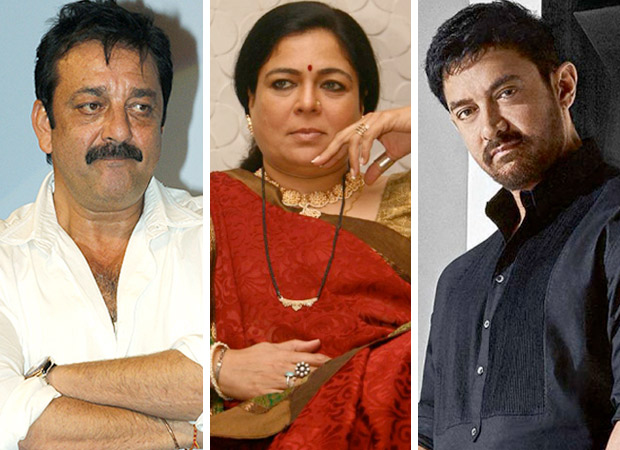 "I have lost a mother again today. Her demise has left a void which is difficult to fill. May God give strength to her family and close ones," read out a statement from Sanjay Dutt on the sad demise of Reema Lagoo ji yesterday May 18. Everyone remembers the iconic son-mother bond Sanjay and Reema ji shared in Vaastav, specially the gun scene that still sends shivers down the spine. If Mr Dutt considered Reema ji to be her mom then he should have made efforts to be present for her funeral instead of sending out a Whatsapp message through his publicist. The apathy of Bollywood towards their own is deeply distressing.

Apart from Aamir Khan, Kajol and Rishi Kapoor ji none of the folks from Bollywood were present at her funeral. It is sad because Reema ji was part of some iconic films like Qayamat Se Qayamat Tak, Maine Pyaar Kiya, Hum Aapke Hain Kaun, Kuch Kuch Hota Hai, Kal Ho Na Ho and Vaastav to name a few. She had worked with some of the biggest names in the film industry and she had a superb connect with people all across the world. A few days back when Vinod Khanna ji passed away, Rishi Kapoor expressed outrage at the youngsters from Bollywood who gave a miss to the funeral of Mr Khanna. Mr Kapoor made sure that he was present at Reema ji's funeral but the youngsters and the senior actors gave Reema ji's funeral a miss.

It is easy to post a quick condolence tweet or a video expressing the sense of loss. What matters more is the effort that needs to be taken to actually be present in the hour of grief with the family. Yes it may seem like a photo opportunity but sometimes tokenism is important to convey to the world that yes Bollywood not only comes together to celebrate the birthdays, weddings and special occasions, the fraternity is also present to express solidarity when one of their own leaves for heavenly abode.

One of the arguments that were given on social media yesterday for the absence of stars at the funeral was that it was too short a time period for people to actually make it to the funeral leaving their 'important' work or red carpet fashion parades. The time is never too short when it involves someone who has been a close part of your professional journey. Aamir Khan is busy preparing for his next film Thugs of Hindostan but he was not only present to express solidarity with the family, he also ensured that Fatima Sana Shaikh and Sanya Malhotra, the two Dangal girls also visited Reema ji's house.

The question that comes to mind is that if someone from a prominent film family (that is still delivering hits) passes away; will there still be the same apathy? No, there would have been an outpouring of emotions. Both the young and the old actors would have thronged to be in the good books. Helicopter rides would have been taken. Last respects would have been given. The stars don't realise but the on screen bond they share with their co actors on screen is considered to be very real by their fans. People emulate film stars in a big way. If they could be there in the final journey of people who have helped them become immortalised, it also sends out a message to the society at large to stick with their near and dear ones when they are no longer alive, and maybe not useful in the worldly sense of the word. Yes Bollywood is under a microscope and it can be tough to be judged all the time but some things are beyond all this. It is definitely a time to introspect.