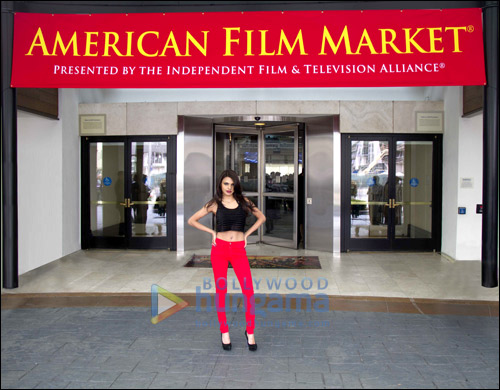 Sherlyn Chopra, who is currently busy promoting her upcoming film Kamasutra 3D, has an added reason to celebrate. After doing a notable pre-sale at the Cannes Film Festival 2013, Kamasutra 3D also made a proud collection from the movie rights being sold to most of the Asian countries and Europe at the American Film Market.

Sherlyn, the first ever Playboy cover girl from India, was in Los Angeles last week at the American Film Market to promote the film, that portrays the character of the sensuous Kama Devi in the love saga.

While Vatsyayana's Kamasutra is an exclusive representation of virtuous and gracious living that discusses the nature of love, family life and other aspects pertaining to the pleasure oriented faculties of human life, it is widely considered to be the standard work on human sexual behaviour in Sanskrit literature.

However, Kamasutra 3D depicts erotica as a force that compels one towards fundamental living. Set in the backdrop of real historical milieu, the film is an epic erotica which weaves the journey of soulful transformations and the forbidden world of sexual love embodied with betrayal and war.