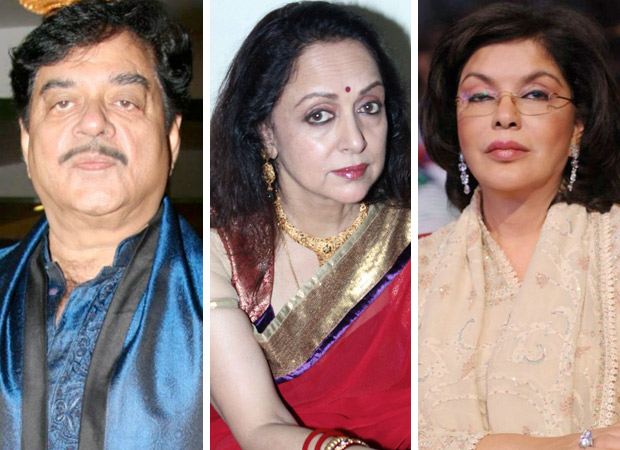 Shatrugan Sinha: “I am in a state of shock. I am unable to express myself properly. Vinod was much more than a dear co-star. He was a colleague and friend. In fact Salman Khan and I were planning to visit him together after Salman’s world tours were over. I went to see Vinod a few days ago in the hospital. But he was fast asleep. I met his brother and three sons and spent time with them. Vinod and I go back a long way. Though he was senior to me our careers were uncannily similar and on a similar track: villain, then hero, then politician for the BJP….We made all the transitions together. It was said that there were only two villains in Hindi cinema for whom the audience clapped when they roughed up the hero. Vinod Khanna and Shatrughan Sinha. We did one of our earliest and most important films together Gulzar’s Mere Apne where we were pitched as friends and enemies. Vinod went on to do many other films with Gulzar Saab. They had a rapport. I was reunited with Vinod for a buddy film called Do Yaar and then we did Bombay 405 Miles and many other films together. I can’t remember the names of all of them. But I do remember that it was always a great pleasure working with Vinod. There was never a sense of competitiveness, rivalry or one-upmanship between us. He never felt threatened by any actor. He was supremely secure in his own space, so secure that he took a 5-year break from acting to live in Oregon with Acharya Rajneesh. When he came back he was welcomed back with open arms. It was as though he was never gone. I will always remember Vinod as one of my most favourite colleagues. My heart reaches out to his family. His three sons are all such fine boys. Vinod was very proud of his children. He was a family man first, career came second.”

Hema Malini: “Just a few days ago our last film together Ek Rani Aisi Bhi released. And now he’s gone. Vinod Khanna was a very fine gentleman, educated articulate and well-informed. I had the opportunity to work with him in several capacities. He was the villain in my early film Patthar Aur Payal where Dharamji was the hero. Then in Haath Ki Safaai he was my co-star though not paired opposite me. Then Vinod was my hero in one of my most favourite film Aruna Raje’s Rihaee where he played my absentee husband. Though he was so urbane and sophisticated in real life he looked every inch the rustic carpenter in Rihaee. He carried off the dhoti so well in the film. I feel he could play every role convincingly. He was my co-star in another of favourite films Chetan Anand’s Kudrat. Rajesh Khanna was also there. Now both the Khannas are gone. It makes me very sad. Gulzar Saab’s Meera which is one of my favourite films featured Vinod as my husband, I played Meerabai and he played Rana Bhojraj. He brought such calm tranquillity and understanding to his role. He was like that in real life too. On the sets I would spend a lot of time discussing Acharya Rajneesh with him. I wanted to understand what it was about that man who made Vinod leave his career and join him in Oregon for five years. He would patiently try to explain the philosophy of Rajneesh to me. Do you know, I came into politics because of Vinod Khanna. I had no idea of politics and how it worked. One day Vinod called to say, ‘I am fighting elections from Gurdaspur. I want you to campaign for me.’ I refused outright saying I knew nothing about politics or campaigning, He insisted. My mother also said I should go since Vinod was such a dear co-star. That’s how my career in politics started. It’s sad when colleagues are gone. Now hardly any of my co-stars are left.”

Zeenat Aman: “More than anything else I’ll always remember him as a thorough gentleman, cultured, polite and knew how to conduct himself with ladies. With Vinod things were always proper on the sets. He would come on time, say his polite hello, shoot and leave. There was never any question of unpleasantness. The first film we did together was Bombay 405 Miles which featured Vinod, Shatrughan Sinha and me. It was truckloads of fun to do because it was a fun subject. Tragically Brij Sadanah who directed us in the film died a gruesome death. Vinod and I then came together for the Feroz Khan blockbuster Qurbani. Feroz was in charge and fully in control. We would come on the sets, do our work and go away. We shot the song ‘Hum Tumhein Chahte Hain Aise’ by a lakeside. Though the song was a duet it was filmed only as a solo number on Vinod Khanna. And I just had to react to his singing. It worked. Vinod was so good at conveying romantic thoughts. A truly handsome man, he would make ladies swoon. But he was not the least conscious or vain about his looks. He was always proper in his behaviour. You would never catch Vinod screaming or getting impatient on the sets. There was never any fireworks or excitement when we were shooting together. Vinod was always proper, always correct in his behaviour. A thorough gentleman. We didn’t meet in recent years. He had his life. I had mine. And now we shall never meet.”

The much lauded Deepika Padukone starrer…

Deepika Padukone always delivers on her…

Kangana Ranaut and Rangoli Chandel are…