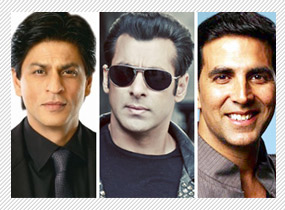 Gone are the days when release dates for holidays were finalized only in the current year. With stakes going higher, Bollywood superstars are now booking their slot more than one, and in some cases two years in advance. This is pretty apparent in the manner in which all, but Gandhi Jayanti and Dusshehra, holidays have been pre-booked for year 2015.

Akshay Kumar and Neeraj Pandey had created waves with Special 26 last year. Though one still waits to hear about the film's title, the duo is all set to kick-start work on the film in a couple of months. Their film would be first biggie of 2015.

This year it was Gunday that made Valentine's Day special and next year it would be Mr. X. Vikram Bhatt and Emraan Hashmi have already started working on this film that brings them together again after Raaz 3. One waits to see how this thriller compliments love on Valentine's Day.

A couple of years back, Salman Khan and Kabir Khan delivered a huge blockbuster in the form of Ek Tha Tiger. Though nothing about their next has been revealed so far, the very fact that they would be reuniting on Eid next year is a reason good enough to wait in anticipation.

Recent announcement of Shahrukh Khan and Yash Raj Films' Fan arriving in the weekend of Independence Day, has thrown Bollywood in frenzy. The month of August has been quite lucky for Shahrukh Khan, what with Chennai Express and before that Chak De India arriving in the same month.

Gandhi Jayanti and Dusshehra - None

These are the two slots waiting to be grabbed. With Ajay Devgn as the only superstar who hasn't signed up a film release for 2015 yet, would he be the one eyeing one or both of these slots?

With Salman Khan and Sooraj Barjatya coming together on Diwali, there couldn't have been a better suited film for a festive viewing. The date is just perfect for Prem Ratan Dhan Payo which spells and smells of 'sanskaar' from every letter. Will Alok Nath star in this too?

There may not be any confirmed hero or heroine for Shuddhi yet but Karan Johar is sure that it is going to be Christmas for his much cherished film Shuddhi. All said and done, whoever stars in it, the film is going to end 2015 with a bang.

"What breaks us also unites us"- Kriti Sanon…