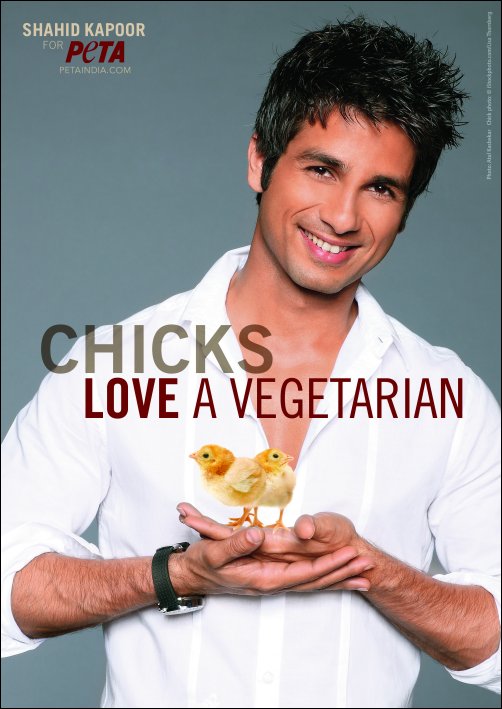 The enormously popular model-turned-actor Shahid Kapoor stars in an adorable new ad campaign for People for the Ethical Treatment of Animals (PETA) India extolling one of the many benefits of a plant-based diet: "Chicks Love a Vegetarian". The ad, shot by ace photographer Atul Kasbekar, shows a casually dressed Kapoor with two downy yellow chicks perched on his body.

Kapoor says, "I love chicksâ€¦ pigs, cows, fish, and all the other animals too. That's why I turned vegetarian."

Kapoor who won PETA India's Sexiest Vegetarian contest in 2009 received the 2003 Filmfare Award for a debut film for his appearance in his Ishq Vishk. His recent films - Jab We Met, Kaminey, Badmaash Company, and Paathshaala - have all been hits.

In India, animals who are killed for food are crammed into vehicles for slaughter in such high numbers that many animals break their bones, suffocate or die en route. At abattoirs, workers often hack at the throats of goats, sheep and other animals with dull blades. Millions of chickens spend their entire lives in huge factory warehouses packed together so closely in tiny battery cages they cannot even stretch a wing. They stand in their own accumulated waste, which reeks of ammonia. The birds never see the light of day and are denied everything that is natural and important to them.

Meat production is also disastrous for the environment. Senior UN Food and Agriculture Organisation official Henning Steinfeld stated that the meat industry is "one of the most significant contributors to today's most serious environmental problems". Nitrous oxide is about 300 times more potent as a global-warming gas than carbon dioxide. According to the UN, the meat, egg and dairy industries account for 65 per cent of worldwide nitrous-oxide emissions.

What's more is that India has one of the highest rates of heart disease and diabetes in the world. Studies show that consumption of animal products is directly connected to cardiovascular disease, stroke, certain cancers, obesity and diabetes. For this reason alone, millions of people choose to go vegetarian.

"I am very happy being a vegetarian and I believe that it is the best way to be," says Kapoor. "The day I started believing in the fact that I would want not to kill animals for my taste buds that is the day everything changed for me."

Team Jersey wraps the shoot after a year,…