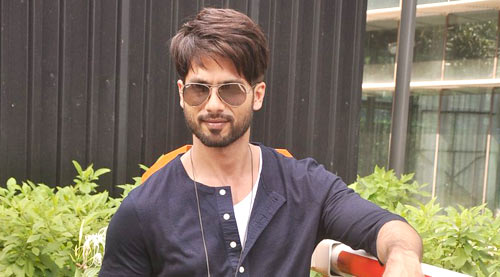 Long back, Sushmita Sen admitted to this writer that she was "surviving on two and a half hits." However, some more bad choices and worse luck and she was completely out of the game.

In that respect, Shahid Kapoor has been extremely lucky-he too has had only two and a half hits in 12 years. Though unlucky in that aspect, he has been lucky that he is still in the reckoning, with producers wanting to sign him for even high amounts, if he agrees to do their movie! Reveals Amod Mehra, trade analyst, "I know of a big producer who is ready to sign Shahid for Rs.10 crores if he has the dates!"

And what can be the reason for this? "The fact that he is a good actor, a star liked by many," says trade analyst Vinod Mirani. Agrees Mehra, "He can act, sing, dance, fight, emote and is good-looking."

Ishq Vishk (2003), Vivah (2006) and Jab We Met (2007) are Shahid's only hit films, and the trade is divided on the actual status of the first two on whether they are average or hit, which is why we mention two and a half. Nevertheless, Vivah is a cult film now on Indian television, and is aired almost every week.

Delhi distributor Brijesh Tandon feels that Shahid Kapoor is plain unlucky. This is also endorsed by Mehra and Mirani who also agree with Tandon on the fact that the actor should choose his films, subjects and directors very carefully now.

So how much does luck come in and what is the contribution of shrewd or good choices in assignments?

Apart from Tips, which has been Shahid's mentor banners for whom he has given flops like Fida, Kismat Konnection and Phata Poster Nikla Hero as well; Shahid's career has been studded with other big names too. He worked with Abbas-Mustan when they were going strong in 36 China Town (that too under Subhash Ghai's banner), Chup Chup Ke with Priyadarshan when he was hot and happening, Yash Raj Films (but in small films directed by debut-making directors-Dil Bole Hadippa! and Badmaash Company) and Karan Johar (his co-production Shaandaar directed by Vikas Bahl of Chillar Party and Queen fame), but the results were nowhere near favourable.

"There was one more adverse factor that affected him early on-his relationship with Kareena Kapoor, which made believe he got films thanks to her," says Mehra. "Plus, thanks to his image as a chocolate hero, he was never taken seriously as an actor till Kaminey in 2009."

Tandon recollects the bumper opening that Kaminey took in his region. "It continued till weekend, but could not sustain. Haider did decently in multiplexes, but not in single-screens." Points out Mirani, "Haider was a loser, and so was Kaminey. These were the films for which Shahid got appreciation. For Shahid's luck to change, he must get offers from and work with, filmmakers who make entertaining commercial cinema, and not with those who just hanker after awards."

In a recent interview, Shahid Kapoor had stated, "Doing what makes me happy is what works for me. I am increasingly not bothered about what others are doing now. I just follow my heart and whatever excites me. Haider was a role nobody, not even I, would have done earlier, but it was the film that got me the maximum love. Hopefully, I will keep doing the right challenging roles rather than think of what works and what does not."

Now this last statement is truly alarming. As with all popular artistes across the board, Shahid clearly needs to attune his inherent skills to what the people want, and do it with committed filmmakers, rather than thinking exclusively or even predominantly about his own excitement or satisfaction. Legends like Shammi Kapoor, Dharmendra and Salman Khan never became self-indulgent. Neither did most of the biggest and best filmmakers, writers or composers.

But even otherwise, Shahid misguidedly opted for bad mainstream projects recently, like Rajkumar Santoshi's Phata Poster... and the terrible Prabhu Dheva film R...Rajkumar, so again it is a moot point whether he is plain unlucky or his judgment has gone for a toss.

What is crystal-clear as of now, however, is that Shahid is simply not in the position of command that Aamir Khan and Ajay Devgn are in making a mix of the class and mass assignments. And let's not forget that the two actors went the offbeat film way successfully only after first consolidating their positions as actors as well as stars, and Shahid should ideally look first at attaining and consolidating a strong position before he opts for the Haider-Rangoon-Udta Punjab kind of "exciting" movies.

Reality, in short, is staring Shahid Kapoor in the face. He has been singularly unable to sift the grain from the chaff, as much in his home production Mausam as in atrocious cinema like Milenge Milenge, Chance Pe Dance or Teri Meri Kahani. Hiring a career manager who cashes in on his strengths-including his appeal with ladies and even kids-and strategizes his image and brand into something the audience will appreciate (rather than what only Shahid would like!) is the need of the hour.

Otherwise, Shahid Kapoor might just end up getting a couple of awards when he actually needs many more hits-and a long-lasting career.