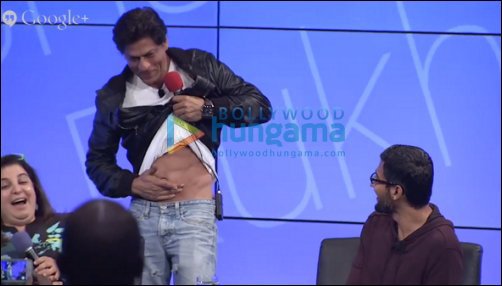 The whole team of Farah Khan's film Happy New Year has been very busy in the last few days, courtesy the SLAM! Tour they are doing in USA.


As a part of this tour, Shah Rukh Khan, Deepika Padukone, and the rest of the team paid a visit to the Google and Twitter headquarters in California and interacted with the employees at both the organizations.

The ever so effervescent Shah Rukh Khan even gave the audiences a little sneak peak of his eight-pack abs, besides sharing his Happy New Year experience!


Directed by Farah Khan and produced by Red Chillies Entertainment, Happy New Year also stars Boman Irani, Abhishek Bachchan, Deepika Padukone, and Vivaan Shah among others. The film is slated to release on October 23 this year.