Hollywood ace filmmaker Christopher Nolan is currently on his three day trip to India. With films like Interstellar, Dunkirk, Inception, The Dark Knight Trilogy among others to his credit, the fans are elated to see the filmmaker and hear his cinema work and vision. After meeting South Indian superstar Kamal Haasan on his first day, it was time to meet superstar Shah Rukh Khan. 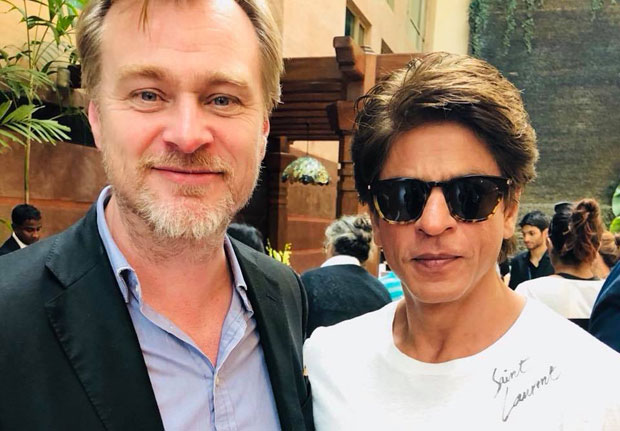 On the second day of his trip, Christopher Nolan and visual artist Tacita Dean met Shah Rukh Khan. SRK, who himself is a big fan of their work and films, admitted that he had a fanboy moment. Upon meeting the ace filmmaker, SRK grabbed the opportunity to click a picture with Christopher Nolan. He called Nolan an inspiring man. He captioned the image, "My Fanboy moment. Inspiring to hear Mr.Nolan & Ms.Tacita Dean talk of the virtues of celluloid as an artist’s medium. Thanks #ShiviDungarpur for having me over."

Christopher Nolan is expected to attend two screenings of his films on Saturday evening. One will be Oscar-nominated Dunkirk, which will be shown in 70mm IMAX at Carnival Cinemas in Mumbai on Saturday at 6 pm. The second film will be Matthew McConaughey starrer Interstellar, which will be shown in 35 mm at Mumbai’s Liberty Cinema on Sunday at 9 pm. Many prominent Indian celebs might join the screenings.

On the work front, Shah Rukh Khan is busy shooting for Aanand L Rai’s film Zero. He is essaying the role of a vertically challenged man. The film stars Katrina Kaif and Anushka Sharma. Presented by Red Chillies Entertainment and Colour Yellow Productions, Zero is slated to release on December 21, 2018.