Shah Rukh Khan is all set to come out with Zero starring Anushka Sharma and Katrina Kaif on December 21 and needless to say, it is an important film for him. His last few films have not been doing very well at the box office and it looks like he will finally get redeemed with the Aanand L Rai directorial. SRK is playing a vertically challenged person in the movie and it is one of his most anticipated roles till now. By the looks of it, he sure has gone on great lengths to look believable as Bauua Singh, his on screen character. Furthermore he will romance Anushka and Katrina, his Jab Tak Hain Jaan heroines in this movie. SRK is leaving no stone unturned to make sure that his film is promoted well throughout India and abroad. 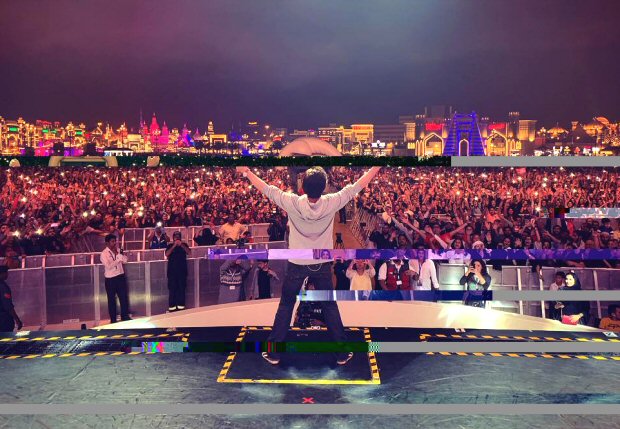 Now, we know that the actor has a large fan base in UAE. SRK was in Dubai promoting his film and he danced, entertained his fans till they were convinced to go watch his movie. Here are the videos that have come out on the net and they are every bit interesting!

Whenever @iamsrk raises his arms and asks for love, he gets it in millions of heartbeats ❤️❤️

Dubai came shining down for Bauua and #Zero. King and his magic ❤️

Entertaining every one who came with so much love ❤️

Shah Rukh Khan was seen with his daughter recently as he saw her stage play titled Romeo – Juliet. He came out on Twitter to praise her performance. Even recently, he shared a pic with her and wrote an endearing caption that it was Suhana who was helping him learn the lyrics of his new song from Zero. We love how this actor balances both work and family, so beautifully well.