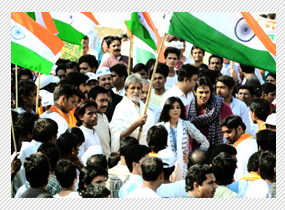 To play an anti-corruption crusader on an indefinite strike to protest against scams and corruption, Amitabh Bachchan has gone on an actual
near-starvation diet so that the scenes in the film appear authentic.

Sources from location in Bhopal say the Big B has ceased to even communicate beyond what's necessary.

However, on Wednesday, there was an unexpected break in the Big B's hunger-strike regime for Satyagraha when director Prakash Jha turned 61.

It happened at the sprawling Ramlila Ground in Bhopal where Prakash was shooting a mammoth public-rally scene with the Big B doing the bhookh-hartaal. A live musical band was also present for the shooting.

Suddenly, all work stopped and everyone in the cast, Big B, Ajay Devgn, Kareena Kapoor, Manoj Bajpayee and Arjun Rampal burst into a live rendering of 'Happy Birthday' for their director.

Recalling the magical moment Prakash Jha says, "We were shooting a critical public sequence with the entire cast and a live band was also there, when suddenly everyone burst into 'Happy Birthday To You' for me. I hadn't told anyone it was my birthday. I am not a birthday person at all. I have never celebrated my birthday even as a child. So, on Wednesday, at first I was embarrassed and then deeply moved. Not every day do you get Bachchan saab to sing 'Happy Birthday' with a live band."

Incidentally, the Big B plays an anti-corruption crusader very similar to Anna Hazare.