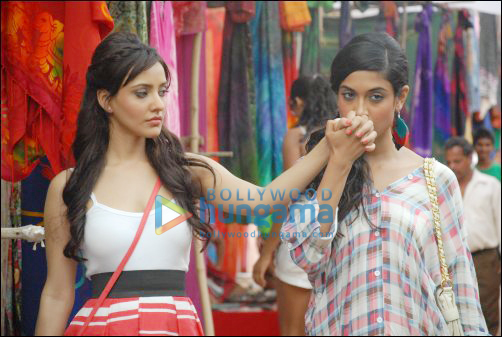 Ekta Kapoor has made no bones about declaring that Kyaa Super Kool Hain Hum is going to be the mother of all fun-filled sex comedies. If the risquÃ© promos are any indication, one could well have expected more in the offing from the Riteish-Tusshar starrer. That has turned out to be the case, what with the pretty girls Sarah-Jane Dias and Neha Sharma joining in the fun. How? Well, it is believed that the two might probably have a lesbian angle in the film and will make some naughty moves on each other.

"There is a portion in the film where Sarah and Neha act like lesbians in love. Their conversations and mannerisms will shock the audience. While one just saw a glimpse of comic homosexuality in Dostana, it has been taken to the next level in Kyaa Super Kool Hain Hum. The love story between Abhishek Bachchan and John Abraham was quite subtle. Now see what Sarah and Neha are up to. Subtlety has been thrown out of the window in their love story," informs a source.

While one waits to see how Riteish and Tusshar react to their lady loves in action with each other, our source informs that these comic scenes with a good dose of sensuality are expected to bring the house down with laughter.

"Neha is the one who is projected as a female Ranjeet in the film," the source adds. "She plays someone who is an epitome of a lecherous woman. She has a habit of checking out women. Sarah has to play a consenting ally."

For both actresses though, it was difficult to get into the groove and ended up requiring quite a few 'rehearsals'.

Laughs Neha, "I had to be really sexual in my tone while Sarah had to be seductive. Check out the film and you'll understand the context of it all! It's completely mad!" Sarah adds, "This isn't something that I could see myself doing. However I am happy to have managed it."

With the kind of comfort they seem to be sharing, looks like the girls could well have made their place in Dostana 2. What say KJo?